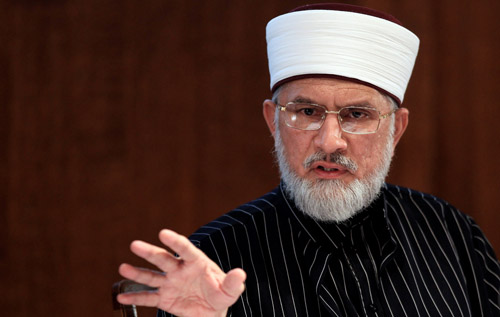 A full bench of Lahore High Court hearing plea for contempt proceedings against Azadi and Inqilab marches and sit-ins by Pakistan Tehreek-e-Insaf (PTI) and Pakistan Awami Tehreek (PAT) at Islamabad directed serving of a notice to Tahirul Qadri.

The court directed the official concerned to ensure service of the notice to Qadri either in dharna in Islamabad or at his residence in Lahore.

The bench comprising Justice Muhammad Khalid Mehmood Khan, Justice Shahid Hameed Dar and Justice Muhammad Anwaarul Haq deferred further hearing for October 20 as Imran Khan’s counsel appeared in the court and sought more time to file a reply to the petitions. Earlier during the hearing on Wednesday informed that notices had not been served to Qadri as he was not available at his Model Town residence. The bench expressed concern that service of the notice to a person who addressed public meetings daily had become an uphill task. Earlier, Advocate AK Dogar, representing the petitioners, argued that Imran and Qadri took out their Azadi and Inqilab marches respectively in violation of an order passed by the full bench.

He said the respondents by ignoring the order exposed themselves to proceedings under contempt of court charges. Petitioners counsel AK Dogar had submitted that Imran Khan had warned of shutting down the entire country if any attempt was made to put him under house arrest.  He said that both party leaders were inciting the police and administration of Punjab as well as the federal government by announcing the police and administration have to decide whether they are “slaves of the Sharifs” or government servants and that if any of his workers is tortured or harassed, the Punjab Police will not get a place to hide. He said that both the parties’ heads are openly inviting public at large for so called revolution after toppling the federal and provincial governments excepting Khyber Pakhtunkhwa by announcing that revolution does not usher in without making sacrifices.

Both of them have further instigated the public at large on different occasions that in case any damage is done to them, they should exterminate Sharif brothers and their families. The counsel submitted that due to illegal threats and designs of Imran Khan and Dr Qadri, the country has suffered a huge financial loss, its economy is going to a dead end day by day and the stock exchange has suffered loss of billions of rupees in three days.  He submitted that fall of one point in the stock exchange means loss of Rs 250 million.

He requested to restrain the political parties from protests and long marches and the millions of rupees, which will spend on these protests, and long marches should be used to help the IDPs of Waziristan. He also requested that the government be directed to take steps for the betterment of law and order situation in the country and further direct all the political parties to be united for the well-fare and prosperity of country. -dailytimes