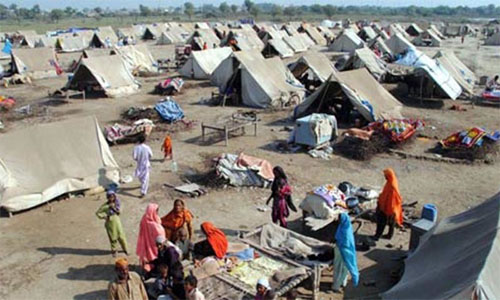 The Punjab government is set to begin on Wednesday (today) the rehabilitation of flood-hit people by distributing initial monetary compensation for the damaged houses in 16 districts in the province.

The initial payment of Rs25,000 for the each partially or fully damaged house was a part of the chief minister’s rehabilitation package and it would continue for the next three days, said Cabinet Committee on Disaster Management chairman Shuja Khanzada at a news briefing here on Tuesday.

The second installment of Rs25,000 for the partially damaged and Rs50,000 for the fully damaged one would start on Oct 20. The campaign would last for five days during which compensation for damaged crops and for damage to household effects of poor people would also be given. Mr Kannada said the total extent of the package was Rs16 billion out of which Rs10 billion had been transferred to the Bank of Punjab through which the compensation would be given to the affected people. He said the provincial government would distribute 35,000 gift hampers among the deserving people on Eidul Azha. [contentblock id=2 img=adsense.png]

This would be in addition to the hampers being arranged by the DCOs of the affected districts. The cash payment would be made at 78 centres under the supervision of the DCOs, MNAs and MPAs concerned. In all 3,484 villages were directly hit by the floods and the affected people would be provided free transport to and from the centres. They would also be given food and to ensure trouble-free distribution of the compensation, all DCOs held mock exercises on Tuesday. Mr Khanzada said 283 people died in the rains and floods early this month. Pecuniary compensation of Rs1.6 million each had been distributed among the heirs of 242 dead.

The rest would be given the amount before Eidul Azha. He said as per the latest figures 75,000 houses were damaged by the floods and the rains which also destroyed crops over 2.4 million acres of land.

He said the government had started thinking of constructing watercourses and diversions in the rivers to minimise loss to life and property by floods. Some international bodies too were approaching the government for the purpose. -dawn

Govt Slashes Up to Rs2.95 off Petroleum Products

Govt Slashes Up to Rs2.95 off Petroleum Products