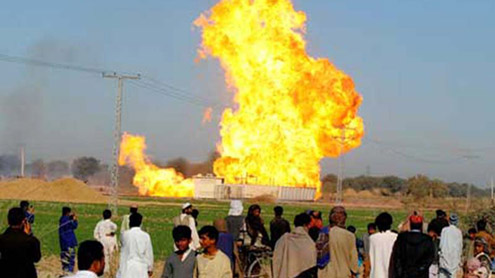 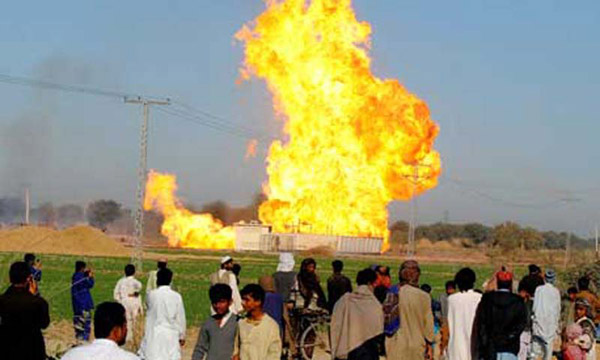 Supply of natural gas to industrial units in most parts of Punjab was suspended on Sunday night after blasts in three pipelines near Yousafabad, some 30km from Rahimyar Khan. Describing the explosions as an act of terrorism, the managing director of the Sui Northern Gas Pipelines Ltd, Arif Hameed, said the gas left in the system was utterly insufficient to meet the demand of domestic consumers in the province. He appealed to people to switch off their gas heaters and geysers to save the fuel for cooking. He said supply to independent power plants in the province had also been suspended.

Mr Hameed told Dawn that the restoration work could take up to three days. He said no one could go near the blast sites due to heat. He said gas supply in the 24-, 18- and 16-inch-diameter pipelines had been suspended but the fire would take time to die down. He said the blasts and subsequent fire had burnt some dwellings as well. Rescue 1122 teams reaching the affected area along with police reported that at least one woman had died in the explosions.

They said the losses would be assessed once the fire was extinguished. Raging flames after the first explosion forced villagers in a radius of 4km to flee their homes. Some sugarcane fields also caught fire. The first explosion took place at 9.33pm, the second at 10pm and the third a few minutes later. The flames could be seen from afar. The villages of Shahbaig, Bahudipur Quraishian, Shahpur, Rangpur, Nabipur and Sikandarabad were affected. This was the first such incident in the district. The gas pipelines from Sui to parts of Punjab had been hit in the past in Rajanpur district. -Dawn