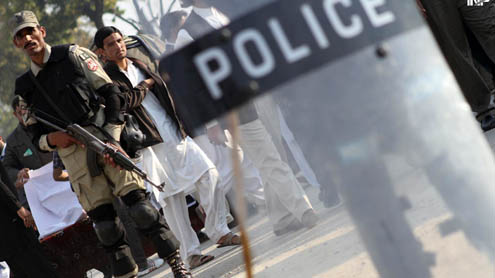 RAWALPINDI: Police on Tuesday claimed to have arrested 48 suspects during a search operations conducted in Pirwadhai and others areas of the garrison city.

The search operation was carried out under the supervision of Superintendent of Police (SP) Rawal Town during which 48 suspects were taken into custody.

Moreover, an unregistered car was also recovered during the raids.According to sources, the raids were conducted in Pirwadhai, Fauji Colony, Mehar Colony, Ziaul Haq Colony and other areas of Rawalpindi.

On Jan 20, more than a dozen people were killed and 18 others wounded in a suicide-bomb attack near General Head Quarters (GHQ) in Rawalpindi.The attack came a day after the Bannu check post attack, which being one of the deadliest attacks on security forces in recent years.

Both the above-mentioned attacks were claimed to be carried out by the banned militant outfit Tehrik-i-Taliban Pakistan (TTP). -Dawn