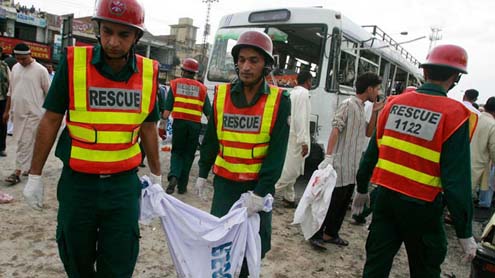 RAWALPINDI: At least eight people were killed and many feared injured in a bomb blast near the RA Bazaar in Rawalpindi on Monday.

The site of the 10 kg bomb explosion also lies near the General Headquarters of the Pakistani military. The injured were being taken to nearby hospitals and most of them were said to be in a serious condition. Also, the injured included mostly civil staff of security agencies and school going children, and parents rushed to the schools near the site of the blast to inquire about their safety. Security forces had cordoned off the location of the blast and started rescue operations. The RA Bazaar being situated near the GHQ is considered as a highly sensitive area.

According to initial reports, it was suspected that the blast could have been a suicide attack. Moreover, police had started investigation and was searching for evidences from the spot where the explosion took place and a search operation was also launched in the adjoining areas.

The blast occurred one day after an attack on a convoy of security forces near the Cantt area in Bannu district, which killed 20 people and injured 30. On Jan 19, Speaking to CNN, Shahidullah Shahid, spokesman for the proscribed Tehrik-i-Taliban Pakistan (TTP) claimed that the militant organisation was responsible for the attack and said that their attacks on security forces would continue. -Dawn