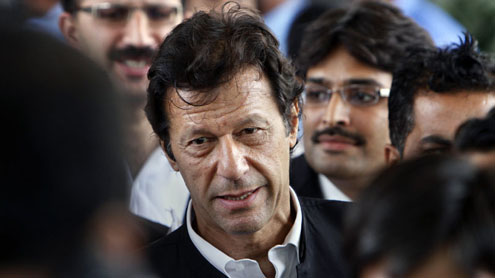 Tehreek-i-Insaf chairman Imran Khan came up on Sunday with an unusual suggestion for improving Pakistan-India relations and said that as a confidence-building measure the neighbors should cooperate in civil nuclear technology.

Both countries should set up a joint nuclear power plant in an area along the border with half of the staff hired from each country for building mutual trust, he told journalists at the airport on his return after a two-day visit to New Delhi.

Accompanied by former foreign minister Shah Mehmood Qureshi, he said the PTI was not against any country — neither India nor the US — but against their policies.

“We are not anti-America. We are against US drones and its war against terror… against India’s Kashmir policy under which it has sent 700,000 troops there.”

He said he believed that without resolving these issues relations with these countries could not improve.

Referring to his meeting with Indian leaders, the PTI chief said they complained of involvement of Pakistani side in terrorism in their country and also expressed reservations about the Mumbai attacks.

He said the hosts were told that Islamabad had similar complaints – that New Delhi was supporting Taliban as well as insurgents in Balochistan.

He said he had put the suggestion about the joint nuclear power plant before the Indian leaders.

He said the Indian leaders were told that both the countries would have to speak the truth to their people and fight against poverty, instead of fighting against each other.

Replying to a question, Mr Khan said his party would go ahead with its plan to hold protests on Dec 22 in Lahore against the price hike and unemployment and announce ways to solving it.

Answering a question about the prime minister’s youth loan scheme, he termed it a pre-poll rigging by the PML-N government and called upon the Election Commission to see that after announcement of local bodies’ election schedule no scheme which might influence voters should be announced.

He told a questioner that his party had not abandoned its demand for verification of thumbprints of voters in four National Assembly constituencies in May 11 general election. He said the party would decide its line of action if the demand was not met. Dawn