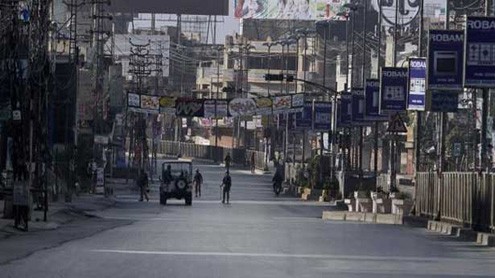 The curfew that was imposed in Rawalpindi on Nov 15 was lifted early on Monday after which schools and offices opened.

The city administration removed blockades from the city’s roads after the end of the curfew and people came out of their houses and began gathering around shops to buy foodstuff and other necessities. Residents who were stuck outside the city also flocked in after the sealed entry and exit points of Rawalpindi were opened. All private schools in the city announced a holiday whereas government schools resumed their routine today.

Security remains on high alert while additional security personnel were deployed at all sensitive areas, especially at places of worship, in the city. The army was called in to take control of the city and a curfew was imposed in the garrison city on Friday after at least nine people were killed and 44 others were injured during clashes that took place between two groups as an Ashura procession was passing in front of a seminary in Rawalpindi’s Raja Bazaar area on the 10th of Muharram. The seminary, its adjoining shops and a cloth market were set on fire during the violence.

Authorities had also decided to suspend cellphone services in the city and linked its restoration with the improvement of the law and order situation. The service suspension was later extended to Islamabad as violence also erupted in the southern towns of Multan and Chishtian, where civil authorities called in army troops to maintain law and order. The curfew saw a four-hour relaxation period on Saturday, allowing Rawalpindi residents who were stuck indoors with limited food supplies to replenish their stocks.

In orders issued on Sunday evening, DCO Rawalpindi said Section 144 of the CrPC has been imposed and assembly of five or more people in any area of the city was strongly prohibited. Cellphone services in the twin cities were restored gradually on Sunday. Moreover, the funerals of the victims of Friday’s tragedy were held on Sunday as they could not take place earlier due to the tense security situation. On the request of the Punjab government, a judicial commission has also been constituted to probe into the incident.

The commission will led be Justice Mammon Rasheed Shiekh and is expected to present its findings within a month’s time. A committee has also been constituted to asses the damage to property and businesses in the city. Meanwhile, Chief Minister Punjab Main Muhammad Shabaz Sharif has given instructions that a suitable place be provided for the damaged mosque and maderssah. -Dawn