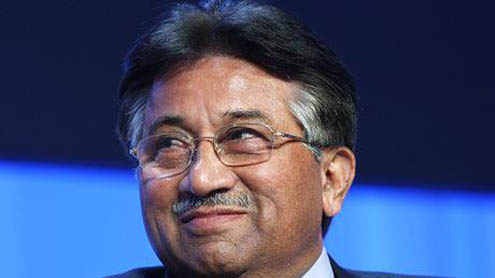 Inspector general of ICT police on Thursday made it loud and clear that a team of senior police officers of ICT police was still investigating charges of murder against former president Musharraf and that the case was yet to be concluded.

“The ICT police is still investigating charges against former president Pervez Musharraf in Ghazi Abdul Rashid murder case. The impression that ICT police have cleared him in the murder case is totally wrong,” IGP Islamabad Police Sikander Hayat told the media during a hurriedly called press conference on Thursday.  The IGP said that the complainant had failed to produce witnesses against the accused as promised earlier during due course of time. This is what, police investigation team told the court that release the accused on bail.

“The complainant could produce only 2 out of 20 witnesses as promised earlier,” Sikander Hayat told the media on Thursday, adding that the police were still investigating the case. Replying to a question, he said police commandoes and the rangers were still performing duties at Musharraf’s residence as it was duty of ICT police to provide the former president foolproof security. Musharraf has been living under house arrest as his house was declared sub jail by the authorities. On Wednesday, following court orders, Islamabad capital police end siege of Musharraf’s house situated in Shahzad Town in suburb of Islamabad.

Only a few of police commandoes, said ICT police officials, were however asked to remain on duty outside Musharraf’s vila just for security concern. According to official sources, jail staff that has been on duty following Musharraf’s house arrest, was asked to leave. “The staff has been asked to  pack up and leave as soon as they get the orders from the lower court,” Ahmed Raza Kasuri, who heads the Musharraf defence team said . Some of the office-bearers of Musharraf’s APML told TheNation that former dictator was a freeman now and can move to Dubai any time to inquire after his ailing mother, however, insiders said his name was still on the ECL that refrain him to fly abroad.

“He can’t fly abroad until his name is removed from ECL,” said an official of Interior Ministry, adding that authorities can only remove his name until legal formalities are completed. Musharraf, who has been under house arrest in a villa on the outskirts of Islamabad, was army chief when he took power in a 1999 coup. He later became president as well. He stepped down after the PPP won the election in 2008. -Nation