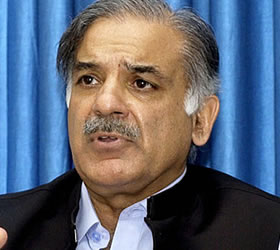 LAHORE (APP)-Punjab Chief Minister Muhammad Shahbaz Sharif on Monday said the nation will successfully cope with the enormous challenges in the wake of massive floods in the country and emerge as a stronger nation.

Talking to media during his visit to Children’s Hospital here, he said Punjab government was committed to reconstruction and rehabilitation of the flood affectees and to set the country on the road to progress by bringing flood victims into the mainstream once again.

He said that distribution of cash aid had been started and it would be completed in one-and-a-half month.

The Chief Minister visited medical, surgery and emergency wards of the hospital and inquired after the health of children and distributed Eidi and Eid gifts among them. Children’s Hospital Medical Director Prof. Ahsan Waheed Rathore, Director Emergency A.J. Samdani and senior doctors were also present on the occasion.

The CM said that more than 20 million people had been affected by worst floods in the country’s history, wiping out many villages and causing loss of billions of rupees. He thanked the international agencies for helping the calamity stricken people.

Shahbaz said that several countries were engaged in the rehabilitation and reconstruction process,including Saudi Arabia, which was in the forefront to serve the affected people.

He said that the nation had to make resources available for the rehabilitation of affectees,adding that solid steps had been taken to protect the affectees from epidemic diseases,besides provision of food and clean drinking water.

The CM said that WHO was also giving input to protect people from malaria and other epidemics and it had distributed malaria kits in the affected areas.

He said that fumigation was being carried out in areas which had stagnant water, adding that water filtration plants had been installed for providing clean drinking water.

Shahbaz Sharif said that public representatives, political workers, administration and police had set an unprecedented example by celebrating Eid with the affected people and he was thankful to them. To a question regarding ‘Watan Card’, he said that initially a hurdle was seen in the process but the situation improved and he was thankful to Prime Minister Syed Yusuf Raza Gilani for extending help in this regard.

He said that a judicial commission had been set up to investigate dykes breaches and its report would be made public, adding that in the light of the report action would be taken against those found involved.

He condemned registration of a case against Kashmiri leader Mirwaiz Umer Farooq and emphasized that Kashmir dispute must be resolved in accordance with the UN resolutions. – App