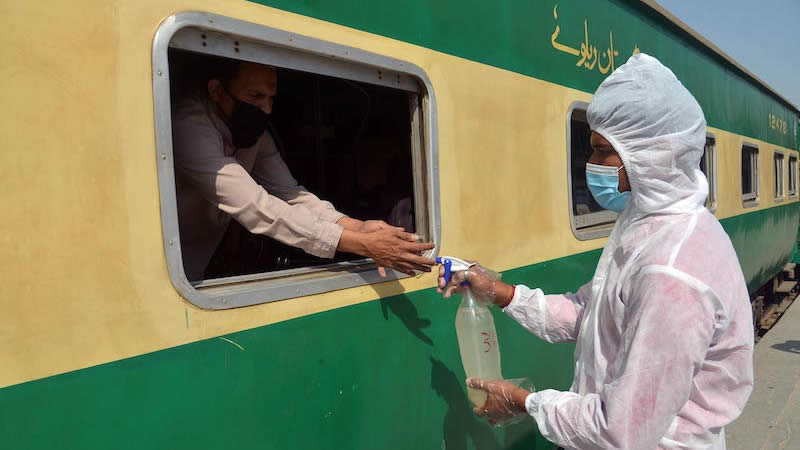 The National Command and Operation Centre (NCOC) on Monday decided to prohibit unvaccinated people from travelling on trains from Oct 1 and called on the provinces to ensure that standard operating procedures (SOPs) were followed during Muharram.

On the other hand, Special Assistant to the Prime Minister (SAPM) on Health Dr Faisal Sultan has announced that the people whose second dose was due could get it without the code from the helpline.

The NCOC meeting presided over by Minister for Planning, Development and Special Initiatives Asad Umar, expressed concern over the spread of coronavirus in Rawalpindi and Peshawar and decided to disallow people, who had not been inoculated, from travelling on trains from Oct 1.

Showing satisfaction at the vaccination process, the meeting’s participants stressed the need for expediting the pace of administration of the second dose.

The NCOC reported that while 29 million people had received their first dose, only seven million got both jabs.

It is worth mentioning here that a large number of people had been turned away by staff at the vaccination centres for not having the code sent by the helpline.

During an event on Monday, Dr Faisal Sultan said the code from the helpline 1166 was no longer required for the second jab.

“As soon as the second dose becomes due, people should go for inoculation even if they do not have the code,” he said.

On the other hand, the United States, through the US Agency for International Development (USAID), handed over one million Covid-19 antigens rapid diagnostic test (RDT) kits to Pakistan at the event.

Speaking on the occasion, the PM’s aide said: “We are thankful to USAID for donating these rapid antigen tests,” adding that this effort was a reflection of the warm ties between the two countries.

USAID Mission Director Julie Koenen said: “These RDTs will serve Pakistan’s needs of quick surveillance and diagnosis and restrict the spread of Covid-19 to its lowest levels.”

It may be mentioned here that the US government has allocated more than $40 million to Pakistan for Covid-19 response assistance, including a donation of 200 ventilators, personal protective equipment and pulse oximeters.

USAID’s assistance also includes a $2 billion contribution to Gavi – the vaccine alliance – to support the purchase and delivery of Covid-19 vaccines for 92 low- and middle-income countries, with another $2 billion commitment planned by 2022.

The forum, in a tweet, said: “Wrong and misleading information is circulating on Social media regarding the administration of various vaccines. For authentic and updated guidelines on vaccines, please visit https://covid.gov.pk/guideline.”

Social media has been abuzz with false information that Sinopharm cannot be administered to people who are over 60 years of age, have had transplanted organs, undergoing chemotherapy and to those afflicted with heart and lungs diseases.

On the other hand, the NCOC data revealed that 53 patients succumbed to the virus and another 4,040 got infected in the last 24 hours.

Moreover, the number of active patients as of Aug 9 was 83,298, out of whom 4,276 were admitted to various hospitals.

US wants Afghanistan's Neighbours to not Recognise Imposed Govt in Kabul