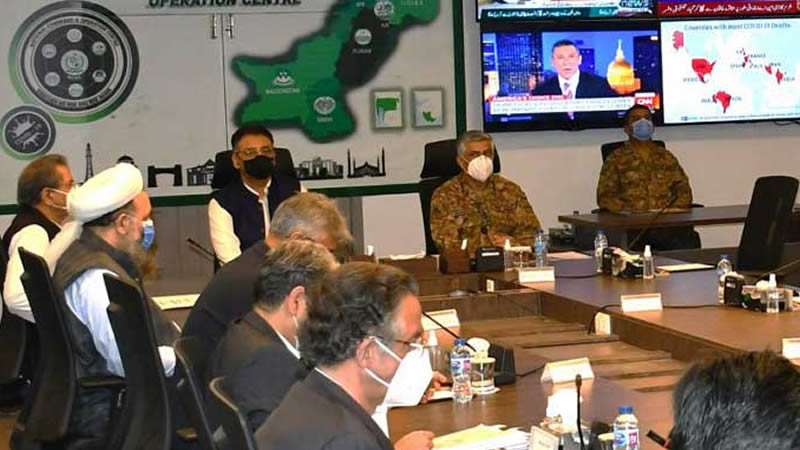 School teachers and air travellers to be vaccinated by Aug 1

Minister for Planning, Development and Special Initiatives Asad Umar has said that individuals from the service sector should be vaccinated by August 31, or will not be permitted to work.

The minister, who also heads the National Command and Operation Centre (NCOC), mandated these directives during a press conference on Thursday. He was joined by Special Assistant to the Prime Minister on Health (SAPM) Dr Faisal Sultan.

According to Umar, all those who work in the service sector, including transport workers, shop keepers, bankers, NADRA employees – or any job which requires dealing with a large number of people – must be vaccinated against the Covid-19 before August 31.

“Students above 18 years of age should also be vaccinated by August 31”, he added.

Umar reiterated that those travelling by air from Aug 1 onwards must have received at least one dose of the vaccine.

Additionally, school and college teachers should also be vaccinated by Aug 1 and observed that statistics from last week show that 80 per cent of teachers had been vaccinated in the country.

“Those who are not vaccinated will not be allowed to work. We cannot risk the lives of our children because you refuse to get the vaccine”.

Umar elaborated that service sector employees interact with large groups of citizens and can expose them to the virus.

“All these sectors are high risk and have been shut down the most in the past. We want your businesses and work to flourish, we do not want to take away your earnings. We are acknowledging your importance, not punishing you”, the minister said to service sector workers.

He emphasised that he wants peoples’ homes, businesses and subsequently the society to flourish.

Both Umar and Dr Sultan highlighted the severity of the situation in Karachi.

“Cases are proliferating exponentially in larger cities, especially Karachi. Due to this, hospitals in the city are under visible burden”, Dr Sultan said.

Asad Umar mentioned that the government supports the Sindh government’s initiatives and discussions for a lockdown, promising the provision of all necessary enforcements.

However, the minister reiterated that shutting cities down is not viable in the long term. He recalled positivity rates decreased around Ramazan when enforcements were stricter but shot back up after the restrictions relaxed.

“As soon as the numbers decrease, we start thinking that the virus is finished. However, our actions are directly linked to the spreading of the virus”, Umar claimed.

The only solution is to vaccinate against the virus, he said.

The SAPM highlighted the proliferation of corona cases within the country.

Nationwide there were 4,497 cases reported, with a 7.5% positivity rate, which are “clear increases” from the past few days.

“There is a direct impact on our healthcare system. The number of critical care patients has increased to 3,000 in the past 24 hours”, he said, adding that during better times in June, there were less than 2,000 critical patients.

Umar recalled that Pakistan was one of the first nations to realise that it cannot shut the country down in the face of the pandemic. “The lower classes and labourer’s have to pay the price of a complete lockdown. When the lockdown ends, the virus starts spreading again”, he said.

Umar maintained that following SOPs and guidelines is necessary, and the only solution is getting vaccinated.

The minister listed rates of compliance in the provinces, with Islamabad having the highest rate at 56.4%. Khyber Pakhtunkhwa came in second with 46.6%, followed by Azad Jammu and Kashmir at 42.7%.

Umar also congratulated the nation for record-breaking vaccination numbers, claiming that this has been the largest ever campaign in Pakistan.

A new record was made yesterday with 849,692 vaccinations taking place across the country. A record for first dose administration was also established with more than 637,000 jabs administered.

The minister hoped to soon cross 1 million vaccinations in a single day.