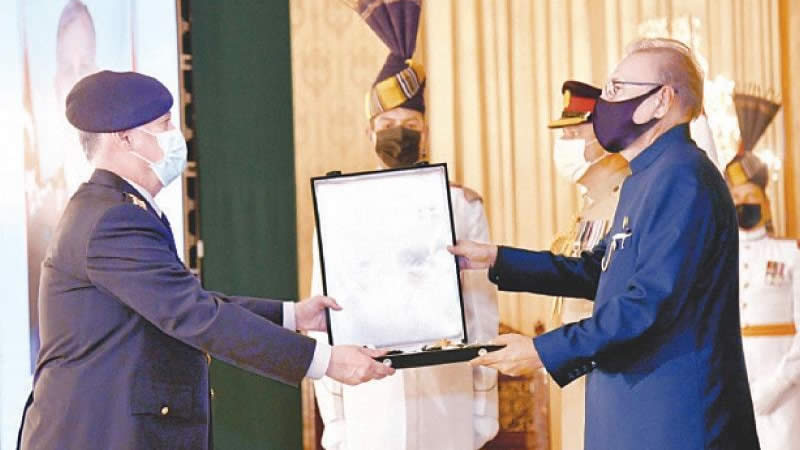 ISLAMABAD: President Dr Arif Alvi on Monday said that India was using Afghan soil for terrorism in Pakistan by providing training and funding to militants.

Pakistan is concerned about involvement of India in terrorist activities in the country by using the soil of brotherly country Afghanistan, the president said while talking to the visiting Commander of Turkish Land Forces, General Umit Dundar, who called on him at the Presidency.

The president mentioned a recent terrorist incident taken place in Lahore on June 23, saying that the terrorist activity was carried out with the support of India.

He also expressed concern over the apathy and silence of the international community over incidents of illegal uranium trade in India.

President Alvi highlighted brutalities of Indian army against the innocent people of held Kashmir, especially after the revocation of articles 370 and 35A in August 2019.

He urged the international community to play its role in resolving the Kashmir issue in accordance with the UN Security Council resolutions.

The president reiterated Pakistan’s resolve to further intensify bilateral cooperation with Turkey as there existed huge opportunities for increasing cooperation in the areas of trade, defence and culture.

He also underlined the need for increasing cooperation with Turkey in various fields for mutual benefits of the two brotherly countries.

President Alvi expressed the hope that the Agreement on Military Training Cooperation between the two countries would further boost military cooperation. He also shared Pakistan’s concern with Turkey over illegal trade of uranium in India and wondered why the international community was silent over the issue which could become a threat to the whole world.

Mr Alvi thanked Turkey for its support to Pakistan at various regional and international fora, particularly on Kashmir and the Financial Action Task Force.

Praising the role of President Recep Tayyip Erdogan in economic prosperity of Turkey and his contribution towards promoting unity among Muslim Ummah, Mr Alvi also lauded the services of General Umit Dundar for promoting ties between the armies of the two brotherly countries and congratulated him on receiving the award of “Nishan-i-Imtiaz (Military)”.

Speaking on the occasion, General Umit Dundar said Pakistan and Turkey were inseparable as they had a long history of cooperation based on common faith, values and historical linkages.

He said the people of Turkey viewed Pakistanis as their brothers and emphasised the need for promoting cooperation in all aspects, particularly defence.

General Umit thanked President Alvi for conferment of Nishan-i-Imtiaz (Military) on him.

Earlier, President Alvi conferred the Nishan-i-Imtiaz award on General Dundar at a special investiture ceremony held at Aiwan-i-Sadr, which was attended by senior military and civil officials of Pakistan.

Gen Dundar also called on Chief of the Army Staff General Qamar Javed Bajwa and discussed with him matters of mutual and professional interest with special emphasis on defence and security collaboration between the two brotherly countries.

According to an Inter-Services Public Relations news release, the COAS said: “We highly value our brotherly relations with Turkey which are deeply rooted in history and entrenched in our cultural and religious affinities.”