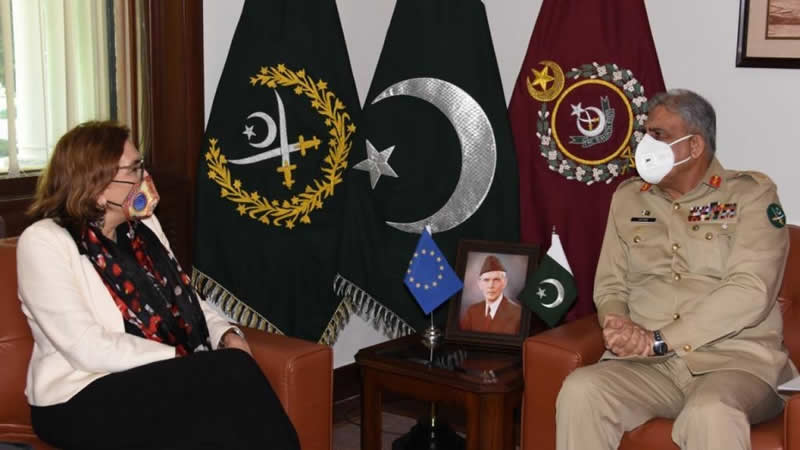 Talking to Ambassador of European Union Androulla Kaminara, who called on him at the General Headquarters, Gen Bajwa, according to the ISPR, said: “Pakistan values its relations with EU and earnestly looks forward to enhance mutually beneficial multi-domain relations based on common interests.”

Anti-France protests in Pakistan last month and calls for expelling the French envoy raised questions about the resilience of Pakistan’s relations with the European Union. Government’s agreements with the group leading the agitation reinforced some of those doubts.

Gen Bajwa’s comments were, therefore, seen as an attempt to clarify some of those concerns.

Regional security situation, including recent developments in the Afghan peace process, had been discussed during the meeting, the ISPR said.

Ms Kaminara, it added, appreciated Pakistan’s efforts for peace and stability in the region, especially for the Afghan peace process.

During the meeting, the minister expressed Pakistan’s deep concern and anguish over the deteriorating humanitarian situation in Gaza. He said the international community had an obligation to help normalise the situation and facilitate a just solution.

The EU ambassador said Vice President Borell had called a meeting of the foreign ministers of EU member states on May 18 to discuss the situation. The meeting was convened to coordinate and discuss how the EU could best contribute to end the current violence, she added.

During the meeting, both sides also exchanged views on the Covid-19 pandemic situation in Pakistan.

The minister said the government was undertaking all possible steps to contain the pandemic through timely decisions and effective preventive measures.

Sindh markets to remain open from 6am to 8pm