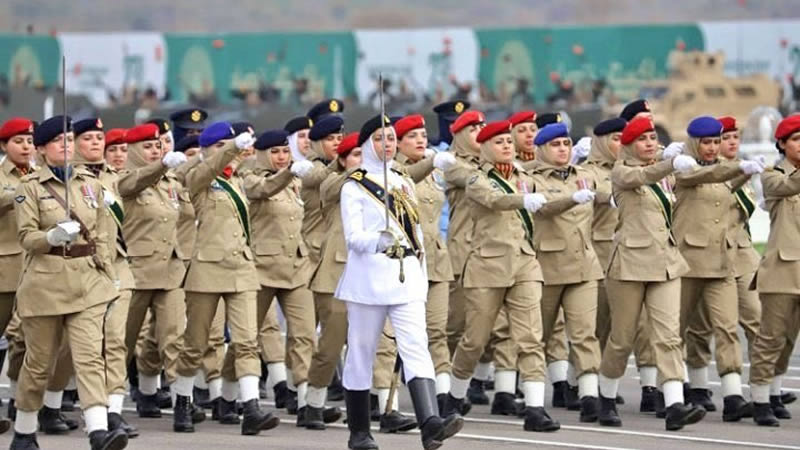 The military parade in connection with Pakistan Day celebrations, previously postponed due to “inclement weather”, was held in the capital on Thursday at Parade Ground near Shakarparian hills.

Prime Minister Imran Khan was unable to attend as he is currently in quarantine after testing positive for Covid-19.

The ceremony kicked off with the fly past of the Pakistan Air Force and Pakistan Navy fighter jets, led by Air Chief Zaheer Ahmad Babar Sidhu, which saluted the president.

The parade also showcased the local cultures of the four provinces as floats from Sindh, Punjab, Balochistan, Khyber Pakhtunkhwa, Gilgit-Baltistan, and Azad Kashmir were featured during the ceremony.

JF-17 and Sherdils performed acrobatic manoeuvres, painting the sky a myriad of colours as an enthralled audience cheered them on.

As a mark of the strong bond between Pakistan and Turkey, a Turkish fighter jet also presented a range of dazzling manoeuvres, the report added. A Turkish military band also surprised the audience by playing national songs.
‘Pakistan fully capable of defending its integrity’

In his speech, President Alvi said Pakistan was equipped to defend its territorial integrity and sovereignty, categorically stating that any misadventure will receive a befitting response, Radio Pakistan reported.

“We will defend our independence at all costs,” he said. However, he added that Pakistan desired peace, security and development in the whole region and had taken practical steps in pursuit of this.

He said that peaceful coexistence was the cornerstone of Pakistan’s foreign policy, adding that the current situation required the South Asian leadership to reject the politics of hate, prejudice and religious extremism.

“Pakistan wants to move forward with good intent and peace, but our desire for peace should not be construed as our weakness,” he said.

President Alvi also paid tribute to the country’s armed forces, stating that the entire country stood shoulder to shoulder with them in the face of foreign aggression and on national issues. “Our martyrs and our ghazis are our pride,” he said.

He also commented on the situation in occupied Kashmir. “The entire nation stands by their Kashmiri brothers and sisters in this hour of trial.” The president also urged the international community to take notice of the grim situation in the occupied valley.
Public holiday and traffic plan

As per notification issued by the deputy commissioners of Islamabad and Rawalpindi, a local holiday was announced in the twin cities in connection with the military parade.

Earlier this week, the military’s media wing had said that the parade had been postponed due to “inclement weather and rain”.

Haseena Moin Passes Away in Karachi

Haseena Moin Passes Away in Karachi