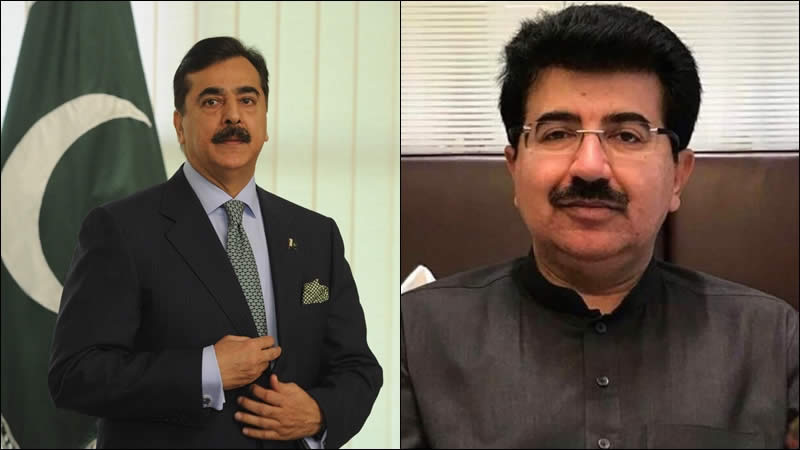 With the election of Senate chairman and deputy chairman just three days away, the government and the opposition have intensified political activities, focussing on making inroads into each other’s camps to win big in the upper house of parliament.

The ruling Pakistan Tehreek-e-Insaf (PTI), the largest single party in the house, has nominated the current Senate Chairman Sadiq Sanjarni for another term. The opposition Pakistan Democratic Movement (PDM), on the other hand, fielded newly-elected Yusuf Raza Gilani.

Gilani, a senior Pakistan Peoples Party (PPP) leader, shocked the PTI in March 3 Senate election, when he outnumbered Finance Minister Hafeez Shaikh in a one-to-one contest for a general seat from Islamabad despite a comfortable majority of the ruling coalition in the National Assembly.

Now, when the same Gilani stands for the Senate chairmanship in the March 12 election, the PPP is engaged in every effort to see him victorious. On Monday, PPP Chairman Bilawal Bhutto Zardari met leaders of the Pakistan Muslim League-Qauid-e-Azam (PML-Q), a government ally, for their support.

On Tuesday, the party reached out to another government ally, the Muttahida Qaumi Movement-Pakistan (MQM-P) once again to seek their votes for Gilani on Friday. Previously, the PPP offered the MQM-P two Senate seats in quid pro quo for their votes in the National Assembly in March 3 polls.

On the other hand, it might sound a “U-turn”, the PTI Jamiat Ulema-e-Islam-Fazl’s (JUI-F) Senator Maulana Ghafoor Haideri, and tried to woo him on its side by offering him the post of deputy chairman.

The offer was turned down by the JUI-F, which is led by Maulana Fazlur Rehman, who also heads the 11-party anti-government alliance. Later, the PDM nominated Haideri as the opposition’s candidate for the post of deputy chairman.

The JUI-F said in a statement that Fazl congratulated Haideri on his nomination, adding that the latter thanked the former for reposing confidence in him. “Will meet your and PDM’s expectations… PDM’s panel would succeed under the leadership of Yusuf Raza Gilani,” Haideri said.

Defence Minister Pervez Khattak’s offer to Haideri on Tuesday sparked a new debate amid an already heated political atmosphere about the stance of Prime Minister Imran Khan towards the JUI-F. The prime minister has often personally targeted the JUI-F and it chief in his speeches.

Most recent was his address in the National Assembly after taking a vote of confidence when the prime minister called Fazl a dishonest man. He called the rest of the opposition leaders, including former prime minister Nawaz Sharif and former president Asif Zardari as “Chor, Daku and corrupt”.

The Tuesday’s surprise began when Khattak while talking to reporters alongside Haideri and Sanjrani, said that “we have invited [Haideri] to come and be the deputy [Senate chairman]. It will be beneficial for him and everyone,” the minister said.

At the time, Haideri did not respond but later the JUI-F issued a statement, stating that “no such discussion” regarding the Senate deputy chairmanship took place in the meeting. Haideri later said that Khattak only talked in front of the media after the meeting, which he condemns in the strongest words as an offer by a government, which the opposition does not recognise, was “meaningless”.

The JUI-F leader said that the party was bound by the decisions taken by the opposition’s alliance, saying that the PDM was completely united and the government was just trying to save its sinking ship.

Even more surprising was the announcement of the JUI-F shortly after PDM statement—the nomination of Haideri as the opposition’s candidate for the post of deputy chairman. The JUI-F also shared a picture on its Twitter handle in which Fazl was seen presenting a bouquet to Haideri.

Soon after Khattak’s offer, political experts wondered if the offer was extended with the approval of the prime minister. In the capital, some considered the offer as an attempt to rattle the opposition alliance but there were others for whom it was nothing more than a storm in a tea-pot.

At the same time, a three member PPP delegation led by Sindh Information Minister Nasir Shah visited the MQM-P Headquarters in Karachi on the directives of Bilawal Bhutto Zardari, and sought support for Gilani in the Senate chairman’s election.

The meeting, which lasted for an hour according to a handout issued by the information department of the Sindh government, was also attended by MQM-P Deputy Convener Aamir Khan, besides senior party leaders Javed Hanif, Rauf Siddiqui and Muhammad Hussain.

Nasir Shah told reporters after the talks that MQM-P Coordination Committee would take the decision in the best interest of province and for people of rural and urban Sindh. “Were are optimistic that our strong case would be pleaded in the Rabita Committee meeting,” he added.

“Political door remains open always and discussions continue. It is the beauty of democratic process,” Shah said. Though, the minister said, the MQM did not support the PPP candidate in the Senate election, but they had come again in the hope that they would support Gilani now.

Meanwhile, a meeting of the PML-N senators was held in Islamabad with senior party leader Maryam Nawaz in the chair. Maryam, the PML-N vice president, took the party senators into confidence regarding the election of the Senate chairman and deputy chairman.

The meeting was informed that the PML-N has decided to vote for Gilani and Haideri on March 12. Maryam expressed added that former prime minister Shahid Khaqan Abbasi has been nominated as the party’s focal person for the Senate election.

Four senators could not attend the meeting due to personal engagements. Dilawar Khan’s wife is under the weather, Nuzhat Sadiq was down with pollen allergy, Kamran Michael was busy at the opening ceremony of his hospital, while Khalid Shaheen Butt was away.