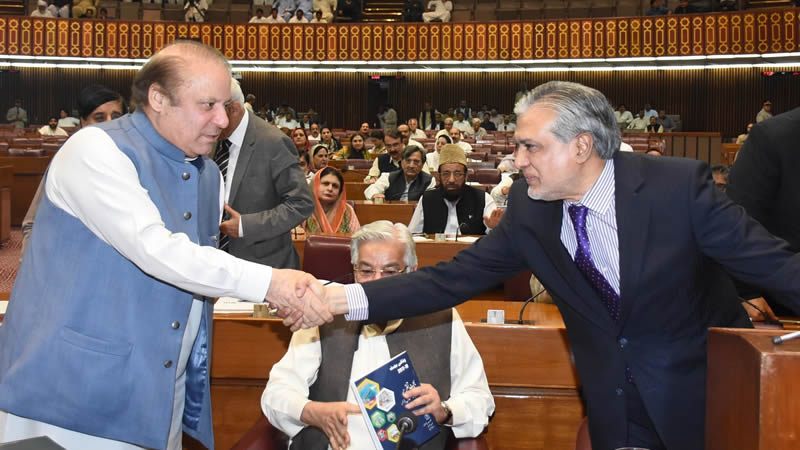 Ishaq Dar, a close aide of former prime minister Nawaz Sharif, faced intense grilling in a BBC interview in which he was asked some gruelling questions, leaving him, at times, at a loss for words.

Dar, who was finance minister in Sharif’s cabinet, has been declared “absconder” following his repeated refusal to defend himself against the corruption charges in the court. Currently, he is in London purportedly for medical treatment.

Appearing in BBC’s Hard Talk, the PML-N senior leader sought to dispel the impression that he was evading law. “You are wanted man in Pakistan. Are you here [in London] to escape the judicial process,” asked the show host, Stephen Sackur.

“No, not at all,” replied Dar. “I believe you are familiar with the political history of Pakistan where corruption rhetoric has been used repeatedly during dictatorships over the last 73 years,” he added. “This time too, it is no different because the current government is also said to be a judicial martial law.”

Sackur confronted him here asking if he is innocent and has no skeletons in his cupboard, then why doesn’t he return to Pakistan to defend himself. “You only own one property in the entire world; your tax records have been kept and given to the authorities for the last 20 years; when everything is crystal clear, then why do you not go to Pakistan to make this case in the court of law,” Sackur asked.

Dar said his attorney was there to contest the cases against him in the court of law and that he was in London for treatment of his “cervical issue”. Sackur confronted him again: “You have been here for three years… You’re still suffering? You couldn’t possibly go back to Pakistan?”

Virtually killed! Sackur might have been left scratching his head. “You say that the people arrested by NAB, National Accountability Bureau, have been killed,” he wondered!

Dar said, “NAB has lost its integrity long ago. It is an institution that has been used for vendetta against political opponents.”

“You didn’t say this when you were a very senior serving government official,” interjected Sackur. “Yes, I had held a press conference on this while we were in the government,” Dar said.

He said the case against him was politically motivated bereft of any truth. “The prime allegation against me which was in the JIT [Joint Investigation Team] report on the basis of which the Supreme Court directed NAB to file reference that I did not file tax returns for 20 years – from 1981 to 2001,” he said.

“I am a UK-qualified Chartered Accountant. I never failed to submit my tax returns when I was in the UK till 1976 and then in North America for two years. And since then in Pakistan. So this is such a blatant allegation.”

Precisely when the PML-N leader thought he had made himself clear, Sackur lobbed another gruelling question. “Let’s be very open and transparent with each other. I’ve interviewed many government officials and ministers around the world for many years. They always say they are not responsible for any corruption and I believe in transparency,” he said. “I do,” said Dar before Sackur could complete his question.

“How many properties you and your family own,” Sackur asked putting Dar a little ill at ease. “It’s all declared in my tax returns,” he said nevertheless. “Give me the answer,” Sackur insisted. “I have my main residence in Pakistan which, you know, has been taken over by this regime. I haven’t got too many properties. My net worth is there [in my tax returns],” said Dar.

Sackur won’t stop insisting. “How many properties you and your family own,” he repeated his question. “One,” Dar, a little irritated, relented.

Sackur then referred to media reports about the properties of Dar and his family in Pakistan and overseas in London and Dubai. “You sitting here in London and you don’t own any property in London? No just you, your family too,” he asked. “No,” was the terse response. “Not even in Dubai,” prodded Sackur.

“My son owns just one villa [in Dubai]. They have been doing business for the last 17 years,” he said. “When I asked you how many properties you and your family own, you said, ‘one’ was that strictly true,” said Sackur piling up misery on Dar.

“Yes, that was strictly true. My children are adult. They are married. They have been in business for 17 years. They are independent of me,” the former finance minister said.

Sackur then said when NAB investigated him it would look into his and his family’s assets. “I have no issue because everything is accounted for,” said Dar.

The former finance minister sought to portray the cases against him and Nawaz Sharif as cooked up and fabricated. “The issue is something different,” he said, adding that “Mr Sharif was fighting for civil supremacy” while he was paying the price his struggle for financial discipline.

Little did Dar know that the mention of “Mr Sharif” could spell more trouble for him in the interview! “Nawaz Sharif is in London, also on medical ground,” Sackur said. “Manhandled by NAB in its custody,” Dar interjected before Sackur could complete his question.

“Manhandled by NAB, you say, but the truth is he is a convicted criminal,” shot back Sackur. A little taken aback, Dar said in both cases against Sharif the judgements state that the prosecution had failed to prove any corruption or kickbacks.

“I’m sorry sir, but he is a convicted criminal,” Sackur said, adding that the accountability court, which works alongside NAB, has convicted him and sentenced him to 10 years in jail – which was later commuted to seven years.

The following question was more scathing. Sackur said that Dar and Sharif are in London on medical grounds and putting themselves forth as leading voices in the opposition demanding early elections and end to Imran Khan’s rule. “What credibility you have to make such a demand,” ask Sackur.

Dar was visibly agitated by the question. “What credibility Imran Khan government has? The world has witnessed it was stolen election, it was a rigged election. We have experienced that in 2018, all pre-poll surveys predicted that the PML-N would win. Observers and the Human Rights Commission of Pakistan called it the dirtiest election. Everyone knows that the election was stolen from us,” he said.

But Sackur was unimpressed.

Quoting from a report of the European Union observers, he said that it did raise serious concerns over sporadic abuses, but their “final and ultimate conclusion was that they believe result was credible – that Imran Khan’s victory was credible”.

“You may not have read all the reports,” Dar said while citing the Human Rights Commission of Pakistan’s findings, but Sackur replied, “You may cherry-pick the most negative, but I am only telling you the report of an independent and highly respected organisation.”

Sackur said Imran Khan’s popularity might have dwindled because of all the economic problems, but when he heard Sharif criticism of the military at last month’s meeting, he immediately said how dare Sharif pointed a finger at the national security institution. This statement must have earned him a lot of support from the Pakistani people who detest hypocrisy.

“Perhaps you have not seen 21 video clips of Imran Khan in which he is defaming the army, army chief and ISI … Last year in the United States, he said that the ISI was responsible for Osama bin Laden. When he was not in power, he was known as ‘Taliban Khan’,” Dar said.

He said Sharif is leading a struggle for democracy and supremacy of parliament in Pakistan. He said he did not accuse the army, as an institution, of undermining the democratic process in Pakistan but stated that “it is the will and plan of some people, the same people who enforce martial law in Pakistan”.

When Dar was asked if the army or the incumbent army chief were undermining democracy, he said the PML-N was not alone as international reports also have stated the same.

“I am not talking about the entire institution, we need to differentiate. These are the wishes and plans of certain people, the same people who enforce martial law in Pakistan.”

“We are saying that if the elections were rigged, and this has now been proven, without doubt, someone is planning the entire thing. This is not us saying it, but the interior minister of Pakistan said that if Nawaz Sharif did not have issues with the institutions and the deep state, he would have become prime minister for the fourth time.”

“If Imran Khan has a five-year mandate,” Sackur said, “You have two options: go to Pakistan and take part in the next election or weaken Imran Khan’s government in London. (And by doing so) you can create new economic and political instability in Pakistan. Does that what you want?”

Dar said, “This is not a matter of political instability. It is a matter of incompetence, lack of performance, destruction of Pakistan’s economy in two years, even before coronavirus pandemic … For the first time since 1952 Pakistan’s GDP growth is negative. From 5.8 per cent, 1.9 per cent in the first year (of Imran Khan government) and minus 0.4 per cent this year. There is unemployment (in the country). We lifted 6 per cent of the people out of poverty, they pushed 6 per cent back below the poverty line.”

He added that Imran Khan had promised 10 million jobs, but so far he has made 12 million people jobless. “Pakistan has a fascist government at the moment,” Dar said. “Our ultimate goal is supremacy of democracy, free and fair elections, and the rule of law.”