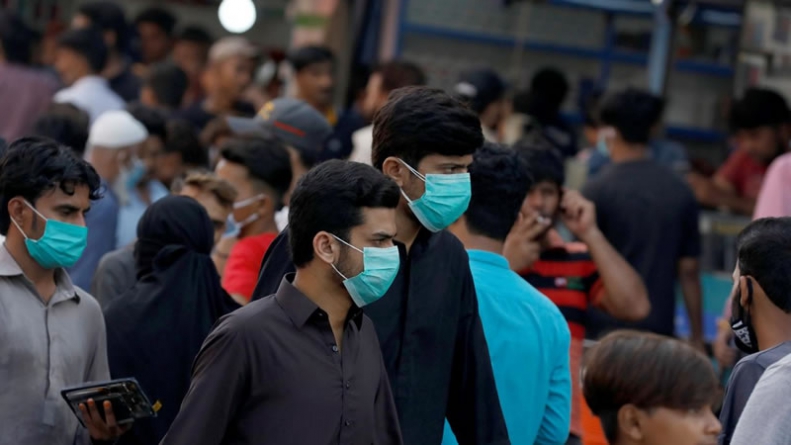 As a number of European countries have announced lockdowns due to a second wave of the novel coronavirus, Prime Minister Imran Khan will chair a meeting of the National Coordination Committee on Covid-19 (NCCC) on Tuesday (today) to deliberate upon the situation and options for placing further restrictions.

“I have a feeling that further restrictions or a line of action for further restrictions will be announced as we cannot afford an increase in cases of the deadly virus,” said spokesperson for the Ministry of National Health Services (NHS) Sajid Shah while talking to Dawn.

He said the meeting would be held in the evening at PM House where the federal and provincial governments, armed forces and other stakeholders would ensure their representation.

While the representative body of doctors, Pakistan Medical Association (PMA), has appealed to the relevant authorities to ensure everyone wears a mask and that the leaders of ruling and opposition parties throwing caution to the wind by shaking hands or by not putting on masks are not given TV coverage, the federal government asserted that decisions could not be taken without taking the provinces onboard.

Asked what kind of decisions were likely to be taken in the meeting, Mr Shah said it would not be appropriate to reveal them before the meeting, as the provinces were also stakeholders and decisions would be announced after seeking their opinion.

A public health professional, who participates in the daily meeting of National Command and Operation Centre (NCOC), said on condition of anonymity said that in May and June Covid-19 cases increased eight folds in just three weeks. “I don’t think that the situation is very bad as we were dealing with a new virus in May, but now a large number of people have exposure to the virus. To some extent we have achieved herd immunity due to which cases will not increase with the pace we observed in May,” he said.

PMA Secretary General Dr Qaisar Sajjad, however, was of the opinion that the virus had become more lethal as it had mutated and bounced back with full force.

Talking to Dawn, he said there was a need to deal with the situation strictly. “The government has declared wearing of mask mandatory, but no one wears mask in public areas. A number of meetings of government and oppositions leaders are televised in which they shake hands and hug each other without wearing masks. NCC should decide that no such event will be covered [by the media] in which there will be violation of SOPs,” he suggested.

The PMA secretary general suggested to the government to give a “clear message” to the masses that they should wear masks. “Unfortunately, we see policemen without masks in mobiles. Banks are one of the few institutions that have been implementing SOPs strictly. Government should take traders’ associations onboard and if fails to implement, it should go for the lockdown of areas,” he said.

The Covid-related restrictions on the tourism, transport and restaurants/hotels were lifted in the second week of August in accordance with the decision taken at the NCCC meeting, which was chaired by PM Khan and attended by all provinces, on Aug 6.

The NCC had also given a timetable for opening of some other sectors, including educational institutions and marriage halls, from Sept 15.