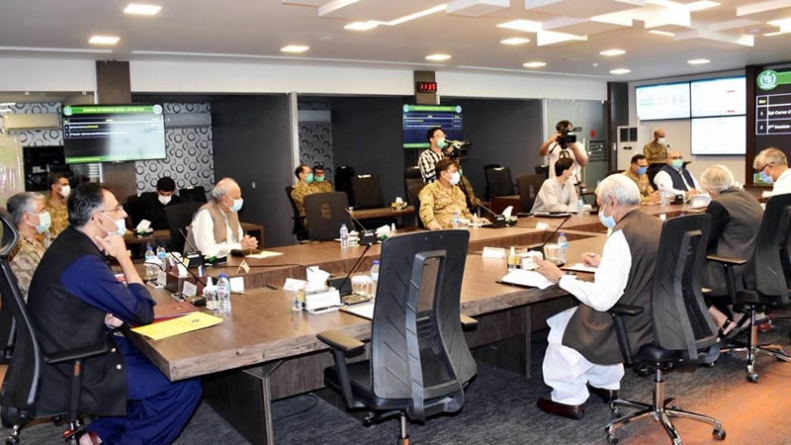 With no let-up in the number of Covid-19 cases, the National Command and Operation Centre (NCOC) on Wednesday warned that if people continued to flout health guidelines, it would have no choice but to order closure of services again.

Declaring the transport sector, markets, marriage halls, restaurants and public gatherings as high-risk areas, the centre advised provinces to focus on them and take steps to prevent the spread of the virus.

These observations were made after a special session was held at the NCOC to monitor the rising infection trend. Chief secretaries of all the provinces attended the session.

According to a statement issued by the Ministry of National Health Services, the NCOC has been closely monitoring the situation and will take action if there is no improvement in the compliance of standard operating procedures (SOPs).

There was a clear resurgence of the virus and the number of deaths was also increasing, the statement said, adding that the chief secretaries had been asked to strictly enforce the SOPs.

“Strict punitive actions on SOPs’ violations will be initiated,” it stated.

Later in the evening, Special Assistant to the Prime Minister on Health Dr Faisal Sultan warned people of the worsening situation in big cities like Karachi, Hyderabad, Multan, Islamabad, Muzaffarabad, Mirpur and Gilgit.

“If the masses continue to violate health protocols, we can face a similar situation as seen in June this year. It is our collective responsibility to avoid such a situation from arising,” he said.

As many as 6,825 cases of Covid-19 were reported from across the country on June 14. However, the graph started to decline and cases fell to around 300 in September. At present, over 600 cases are being reported daily.

Dr Sultan advised people to wear masks and sanitise their hands, ensure social distancing and avoid going to crowded places. He also appealed to traders not to allow customers into their shops without masks.

“Shopkeepers have pasted the sign ‘No Mask No Entry’ outside their outlets, but this is not being followed. It is feared that the number of cases might increase rapidly as 19 people died of the virus throughout the country on Oct 20. I fear that we will have to impose restrictions again if people continue to violate health protocols,” he said.

Terming the next two weeks crucial, Dr Sultan said efforts should be made to control Covid-19 so that businesses remain open, adding that the entire world had praised Pakistan for controlling the deadly virus.

The novel coronavirus was first detected in China in December last year which then spread to other countries. Pakistan closed its borders and took a number of steps to stop the spread. The first case of the virus was reported in Pakistan in the last week of February.

On March 13, a meeting of the National Security Committee, comprising top civil and military leadership, was held to discuss the crisis after it was declared a pandemic by the World Health Organisation.

Prime Minister Imran Khan, who had chaired the meeting, directed the authorities to devise a comprehensive strategy to check the spread of the disease.

Lockdown was announced on March 16 and a number of industries, educational institutions, restaurants and marriage halls were closed.

The National Disaster Management Authority was involved to ensure availability of medical equipment and health-related supplies at the earliest.

After the construction industry was opened on Aug 7, the National Coordination Committee on Covid-19 lifted restrictions on tourism on Aug 8 and on restaurants and transport sector from Aug 10. It also gave a timetable for opening other sectors, including educational institutions and marriage halls.

After easing of restrictions, a large number of people thronged public spots without following the SOPs. As a result, tourist destinations in Gilgit-Baltistan had to be closed.