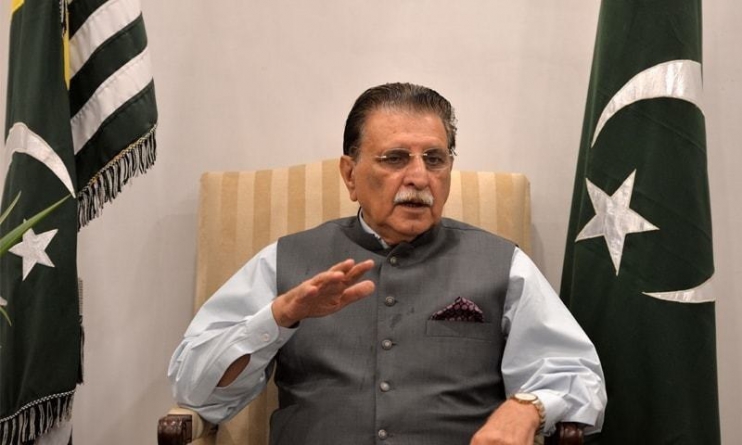 The controversy over the FIR against former premier Nawaz Sharif, Azad Kashmir Prime Minister Raja Farooq Haider and 40 other main leaders of the Pakistan Muslim League (PML-N) took a new turn on Tuesday when its complainant turned out to be a ruling Pakistan Tehreek-i-Insaf (PTI) worker having a criminal record.

In a related development, the Punjab government decided to strike the name of Raja Farooq Haider off the FIR apparently after criticism from different quarters which saw the move could be damaging for the Kashmir cause.

On Monday, Lahore police under their new ‘controversial’ chief Umer Shiekh had registered an FIR (first information report) against Nawaz Sharif, his daughter Maryam Nawaz, Raja Farooq Haider and other top PML-N leaders under sedition and other charges.

After the criminal record and pictures of the complainant, Badar Rashid alias Heera, with the PTI leadership appeared, the PML-N was quick to blame Punjab Governor Chaudhry Sarwar for getting the case registered against its leadership. Rashid is said to be a PTI Labour Wing office-bearer.
Article continues after ad

Interestingly, Rashid, a resident of Khurshid Park in Shahdara, has been booked under attempted murder charges by the Shahdara police where he is now a complainant in the sedition case against the PML-N leadership. He is also nominated in FIRs for possessing illegal weapons in Sharqpur (Nankana district) and attacking a police officer at the Old Anarkali police station.

Badar Rashid, who was arrested in some cases, also contested election for a union council chairman post on a PTI ticket.

As both the Punjab and federal governments have distanced themselves from registration of the FIR, several questions are raised as how come a station house officer (SHO) is empowered to register a sedition case against two former prime ministers, the AJK premier, three former army officers, former Sindh governor, former defence and interior ministers, former law minister of Punjab and others without the order of someone from the top in the PTI government or in the powers that be.

Besides, a police station usually does not register a case unless it falls within its limits. The speeches of Nawaz Sharif were made at a multiparty conference in Islamabad and at the PML-N’s Central Executive Committee on Sept 20 and Oct 1 in Model Town, Lahore, but the case has been registered at the Shahdara police station. Capital City Police Office Umer Sheikh offered no reply to these queries when Dawn contacted him.

The CCPO office issued a statement clarifying that the FIR (against Nawaz Sharif and other PML-N leaders) had not been registered on the order of the state or any state institution but on the complaint of a citizen, Badar Rashid.

“Police applied all relevant clauses of the law in this case. Investigation is under way in this case on merit and any of the nominated suspects found involved in the said offences will face further legal action. It will be ensured that justice is done in the case,” it said.

Talking to Dawn, Punjab Information Minister Fayyazul Hasan Chohan said: “We will strike off the name of Azad Kashmir Prime Minister Raja Farooq Haider from the FIR at the investigation stage. However, investigation against others nominated in the case will proceed as per law.”

When asked if the Buzdar administration decided to strike off the name of Mr Haider following the displeasure shown by Prime Minister Imran Khan, he said: “No…we have no role in its registration as police registered it on a complaint of a citizen.”

Mr Chohan also dismissed reports that Rashid alias Heera was a PTI office-bearer. “The complainant has no link with the PTI. There are several people who have photoshoot with the PTI leaders but that does not mean they become PTI workers,” he said.

PML-N Punjab information secretary Azma Bokhari said Badar Rashid was a PTI UC chairman ticket-holder and his brothers had been booked in 15 FIRs. “A brother of Rashid worked in the NGO of Governor Sarwar’s wife. Chaudhry Sarwar who represents the federation has ordered registration of this FIR,” she alleged.

“This case cannot be registered without the approval of the federal government. No SHO could dare register the FIR against the top leadership of the country without the order of the government,” she said.

The PML-N lawmaker further said that federal Minister Fawad Chaudhry’s claim that PM Khan did not know about registration of the FIR was a “ridiculous defence”. “The sedition case against AJK PM Haider earned a bad name for the country. The PTI government has caused an enormous damage to the Kashmir cause,” she said.

Chaudhry Sarwar told a private TV channel that Badar Rashid’s pictures were not only with him but also with other PTI and PML-N leaders, Railways Minister Sheikh Rashid and some members of the establishment. “But it does not mean I have any link with him as politicians meet many people every day,” he clarified.

In a tweet, PM’s special assistant Shahbaz Gill reiterated the government stance that it had no role in the registration of the FIR. He said why only one aspect [on whose request the FIR is registered] was being discussed [in the media] and why not on the real issue.

Nawaz Sharif, Maryam Nawaz, Raja Zafarul Haq, Sardar Ayaz Sadiq, Shahid Khaqan Abbasi, Ahsan Iqbal, Khawaja Asif, Pervaiz Rashid, Khawaja Saad Rafique and others are facing charges under the Pakistan Electronic Crimes Act (2016) and sections 124-A (sedition), 121-A (conspiracy to wage war against Pakistan), 120 (concealing design to commit offence punishable with imprisonment) 120-A (criminal conspiracy), 120-B (criminal conspiracy), 123-A (condemning the creation of the country and advocating the abolishing of its sovereignty), 124 (assaulting President, Governor, etc, with intention to compel or restrain the exercise of any lawful power) and 153-A (promoting enmity between different groups) of the Pakistan Penal Code.