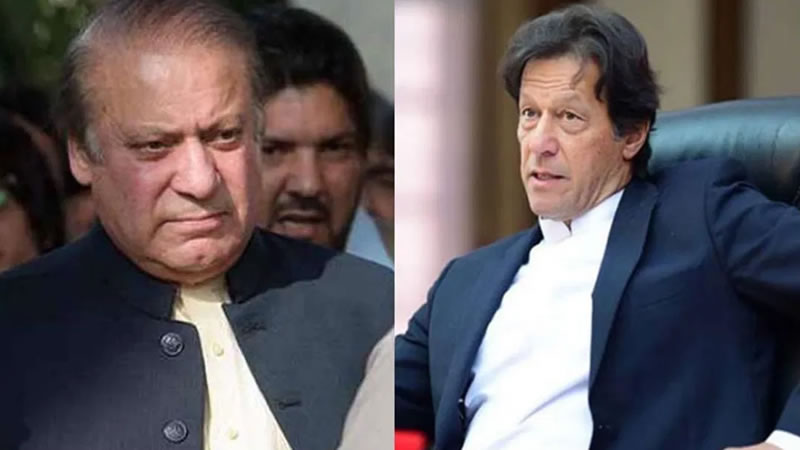 In an interview with a private TV channel, the prime minister accused the former prime minister of creating a huge mischief by attacking the army. He also alleged that Sharif could resort to any extent to save his ill-gotten money and escape the accountability process.

“Nawaz Sharif is playing a dangerous game against Pakistan and I am 100% sure that India is supporting him,” Imran said. “Why Nawaz Sharif always had a dispute with army chiefs, because he was involved in the corrupt practices and wanted to control them.”

He said Sharif during his tenures had controlled the civil institutions, he sent his workers to attack the Supreme Court when the then chief justice, Sajjad Ali Shah, could not be controlled. “Only the army was not under his control. That is why he couldn’t get along [with them],” he added.

Convicted former prime minister Nawaz, who was allowed to fly to London for treatment late last year, broke his long silence last month, saying that the opposition was up not against “selected prime minister” but against those who had brought him into power in the 2018 elections.

Imran said that Sharif was playing the same dangerous game, which once the MQM founder Altaf Hussain tried to play. “He (Sharif) is becoming the next Altaf Hussain. He is a coward, I am sure he has support [from India],” Imran added.

He said India’s interest was to weaken “our army”, adding: “India’s think-tanks say that they want to break Pakistan”. Some “foolish liberals” he continued, were agreeing with the narrative of Sharif, who was creating a “huge fitna [mischief]” by attacking the army.

Responding to a question, Imran said that for the first time in the history, his government had excellent relations with the military. “I don’t have any issues with the army. It is our asset… during every crisis it [army] extended all-out support to my government,” he said.

Prime Minister Imran emphasised that the Pakistan army was the only well-managed and well-organised institution of the country and had played a major role in controlling Covid-19 pandemic and locust attacks.

Imran said the army stood by his all policies, including his decision to open Kartarpur corridor, Afghan policy and other matters. Sharif, he added was targeting country’s institutions to bring them under pressure.

He also pointed out that many Muslim countries were in chaos today because they did not have a strong military. “Look at Libya, Syria, Iraq, Afghanistan, Yemen; the entire Muslim world is burning. Why are we safe? If it weren’t for our army, our country would’ve been in three pieces,” he added.

Imran said the army could not be blamed for the mistakes made by some dictators. “If a dictator made mistakes will we always call the army bad? If Justice Munir gave a wrong decision will we call the judiciary bad? If politicians looted wealth and stashed it abroad, are all politicians bad?”

At an all-party conference (APC) on September 20, the opposition parties upped the ante against the government as they demanded immediate resignation of Prime Minister Imran Khan and announced a countrywide protest campaign.

Imran said he was not threatened by the opposition’s announcement of launching a street movement against him. “No one could know about street movements better than me,” Imran added, while responding to a question.

“All big thieves have joined hands to save their illicit money,” he said. “I will not grant them NRO,” he added, while referring to the political amnesty granted by former military ruler Pervez Musharraf in 2007 through the National Reconciliation Ordinance.

Imran reiterated that he would never succumb to the pressure and step down from his post. “They [opposition] only want the prime minister’s resignation because they think they can strike a deal with a new man but they would never get one.

Prime Minister Imran said he was the “first person in the country’s history” who won elections from five constituencies and who was “not grown in any military nursery like Nawaz Sharif or Zulfikar Ali Bhutto”.

He also said that unlike the Sharif family, he submitted the money trail of his properties in the Supreme Court and got a clean chit. “I did not raise a hue and cry or accused institutions of targeting me,” the prime minister added.

Speaking about Sharif’s departure for London for treatment late last year, Imran accused the former prime minister of “lying shamelessly”, saying: “All kinds of lies were told that he is about to die, [his] platelets are low, etc.” which led the government to allow him to leave.

Referring to the claim reportedly made by Sharif that former Inter-Services Intelligence (ISI) director general Zaheerul Islam had called him to ask him to resign, Imran said: “You were the prime minister, [how] does he have the courage to say that to you?”

When asked about a meeting held between prominent opposition leaders and Army Chief Gen Qamar Javed Bajwa, Prime Minister Imran said Gen Bajwa had called the meeting regarding Gilgit-Baltistan (G-B) after asking him.

“There was a purpose behind [the meeting],” the prime minister said. “India is active in G-B; it is also part of the CPEC [China-Pakistan Economic Corridor] route and … the region is in limbo. The people there want rights and India is exploiting that,” he said.

“It was important that the [army] explained to them what security issues are coming up. Whenever there is a security matter, I prefer the army to explain because they have institutional memory,” the prime minister added.

Imran said that India wanted to create disturbance in the country by creating a Shia-Sunni conflict. “We knew for three months, they were aiming for the assassination of Shia and Sunni scholars. Thank God, our agencies caught that [and] a terrorist group was busted in Punjab,” he revealed.

US Election: Rules on Debates to Change after Trump-Biden Spat