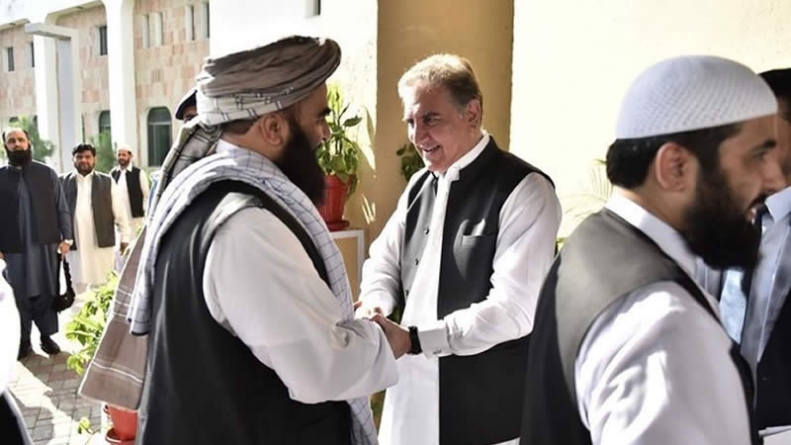 Pakistan on Tuesday cautioned against “spoilers”, who did not want to see peace in Afghanistan, as it urged all parties to seize this “historic opportunity” to put an end to the lingering conflict in the war-ravaged country.

The statement came from Foreign Minister Shah Mahmood Qureshi during a meeting with the Taliban Political Commission (TPC) delegation, headed by Mullah Abdul Ghani Baradar, at the Foreign Office. The head of Inter-Services Intelligence (ISI) Lt Gen Faiz Hameed was also present in the meeting.

The visit of the Taliban delegation comes against the backdrop of efforts for early commencement of intra-Afghan dialogue – a crucial phase of the peace process. According to a handout issued by the FO, views were exchanged on the current status of the Afghan peace process and the way forward during the meeting.

Welcoming the delegation, Foreign Minister Qureshi underscored Prime Minister Imran Khan’s consistent stance that there was no military solution to the conflict in Afghanistan and that a political settlement was the only way forward.

Highlighting Pakistan’s positive contribution to the peace and reconciliation process, culminating in the US-Taliban peace agreement in Doha on February 29, 2020, the foreign minister urged the Afghan stakeholders to seize this historic opportunity to secure an inclusive, broad-based and comprehensive negotiated political solution.

Qureshi reiterated Pakistan’s commitment to a peaceful, stable, united, democratic and prosperous Afghanistan. He emphasised the implementation of the US-Taliban agreement, in its entirety, paving the way for the earliest possible commencement of intra-Afghan negotiations.

The foreign minister also cautioned against “spoilers”, who did not wish to see peace return to the region. Qureshi stressed, “Pakistan will continue to support an Afghan-led and Afghan-owned peace process for durable peace, stability and prosperity in the region and beyond.”

The foreign minister also highlighted the importance of Pakistan-Afghanistan ties based on amity, shared history and geography and reaffirmed Pakistan’s abiding solidarity with the brotherly people of Afghanistan.

He urged the international community to enhance its engagement for reconstruction and economic development of Afghanistan. He also underscored the need for creating economic opportunities and an environment conducive for return of Afghan refugees to their homeland with dignity and honour.

Mullah Baradar thanked Qureshi for the invitation and affirmed support for efforts for peace, security and development in Afghanistan. The delegation also thanked Pakistan for its consistent support to the people of Afghanistan, and for graciously hosting Afghan refugees for over four decades.

Previously, a TPC delegation, also led by Mullah Baradar, had visited Pakistan in October 2019 for wide-ranging consultations on the Afghan peace and reconciliation process. During that visit, Pakistan facilitated a meeting between Mullah Baradar and US special envoy Zalmay Khalilzad just days after President Donald Trump abruptly called off peace talks with the Taliban.

With the exchange of prisoners between the Afghan government and the Taliban almost complete, the focus is on the intra-Afghan dialogue. The dialogue is seen as crucial as it will seek consensus among all Afghan players on the future political dispensation of the country.

The US is keen to see some sort of deal before Trump goes for re-election in November this year. Sceptics; however, are wary of any early breakthrough given the differences among major political players. Pakistan and other immediate neighbours of Afghanistan want an orderly withdrawal of US-led foreign forces from Afghanistan in order to avoid any civil war.

The suicide bomber detonated explosives in a truck near an Afghan army base in the restive northern province of Balkh, military spokesperson for the region Hanif Rezayee said.

Taliban spokesperson Zabihullah Mujahid said on Twitter that the attack was revenge for a video circulating online that appeared to show Afghan troops desecrating the bodies of Taliban soldiers in the south.

The Ministry of Defence has launched an investigation into the video, which surfaced earlier this month.

The assault on Tuesday killed two civilians and a commando and wounded more than 40 others, Rezayee said. Many houses were damaged or destroyed and soldiers were helping to get the victims to safety, he added.

The Ministry of Defence confirmed the attack.

Afghan President Ashraf Ghani condemned the attack on the military base and urged the Taliban to begin talks.

“The Taliban’s emphasis on continuation of violence poses challenges to the peace opportunities,” Ghani said, according to Afghan president spokesperson Sediq Sediqqi.

“The Taliban should give up fighting and killing Afghans, accept a ceasefire and start direct talks with the government of Afghanistan.”

In a separate incident on Tuesday, gunmen shot and wounded Saba Sahar, a well-known Afghan actress and women’s rights campaigner.

Police said Sahar’s driver and bodyguard were also wounded in the attack in Kabul. (With additional input from afp)