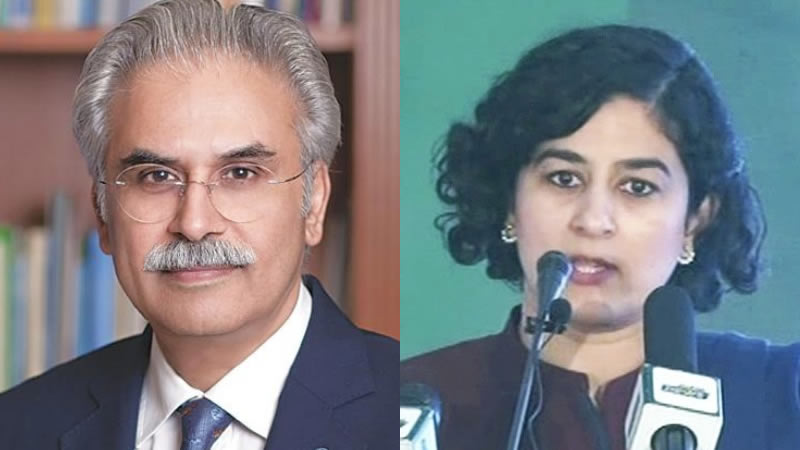 Their resignations come days after the opposition lambasted the government following the latter’s move to make public details of the assets and dual nationalities of 20 advisers and special assistants to the prime minister.

Aidrus said she was resigning from her post due to recent criticism levelled against her and the government because of her dual citizenship.

In a tweet, Aidrus said: “Criticism levied towards the state as a consequence of my citizenship status is clouding the purpose of Digital Pakistan”.

“In the greater public interest, I have submitted my resignation from the SAPM role. I will continue to serve my country and the PM’s vision to my best ability.” She also attached a picture of her resignation letter addressed to the premier.

In the letter, she stated that she had returned to Pakistan with the “singular intent to contribute and develop the vision of a Digital Pakistan”.

“I always was and shall be a Pakistani.”

She added that her Canadian nationality, a consequence of her birth and not an acquisition of choice, served as a distraction to her ability to execute the long-term vision for a Digital Pakistan.

“It is unfortunate that a Pakistani’s desire to serve Pakistan is clouded by such issues.”

Shortly after Aidrus announced her resignation, Mirza took to Twitter to do the same. He said that he had come to Pakistan on the personal invitation of the premier after leaving the World Health Organisation (WHO).

“I worked hard and honestly. It was a privilege to serve Pakistan. I am satisfied that I leave at a time when Covid -19 has declined in Pakistan as a result of a grand national effort.”

He added that he had made the decision over the “negative discussion about the role of SAPMs and criticism of the government”.

“Pakistani people deserve better healthcare. I have worked sincerely to contribute to this cause. Pakistan will Inshallah emerge out of Covid-19 with a stronger healthcare system.”

Prime Minister Khan had launched the Digital Pakistan programme in December last year and named Aidrus, a Google executive who quit her position, to lead the initiative. Later in February, she was appointed as SAPM on Digital Pakistan.

Meanwhile, Mirza was assigned the portfolio of National Health Services, Regulations and Coordination in April 2019 and was engaged in overseeing the government’s response to the Covid-19 pandemic.

Prior to this, he was working as director of Health System Development at the WHO Regional Office for the Eastern Mediterranean.

On July 18, the cabinet division had issued the details of the assets and nationalities of 20 advisers and special assistants to the prime minister.

It was also revealed that Mirza owned a house and property in Chattar, Islamabad, amounting to Rs20m and two plots in DHA Rawalpindi and Taxila worth Rs15m each.

After the details were made public, the opposition was quick to lash out at the government for its hypocrisy and had questioned how the premier’s advisers and aides sitting in the federal cabinet can be dual nationals when the same was not permissible for members of parliament.

“Imran Khan has repeatedly said he stands against government aides, advisers, ministers who swear an oath of allegiance to another country. What happened to #MadeinPakistan?,” PPP Senator Sherry Rehman had said.