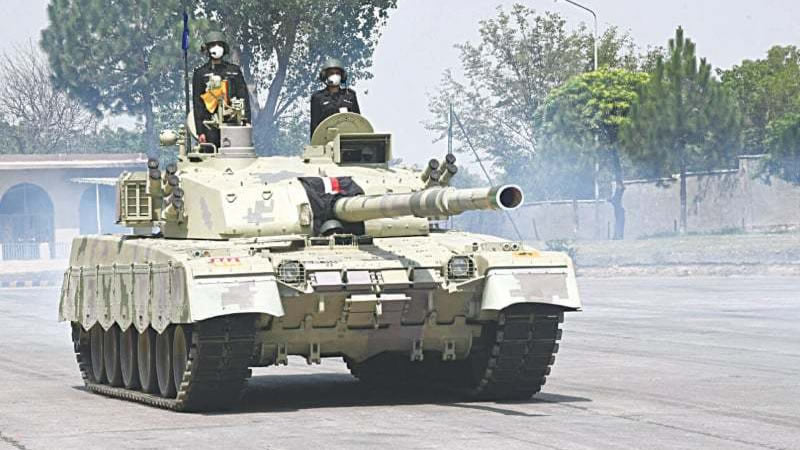 The handing over ceremony of the tank, which is an upgraded version of Al Khalid tank, was held at Heavy Industries Taxila (HIT), the largest state-owned manufacturer of defence products.

Army Chief Gen Qamar Bajwa was the chief guest at the ceremony.

Speaking on the occasion, Gen Bajwa said Pakistan, if provoked by the adversary — a reference to India — would respond with full force.

“Our defence preparation and operational readiness is to ensure peace within and peace without. However, if provoked we shall respond and respond with all our might,” the army chief declared.

Relations between arch-rivals India and Pakistan have been very tense since the military standoff last year in February and March and the subsequent annexation of Occupied Kashmir by India.

Pakistani analysts fear that India, which has failed to restore normality to Occupied Kashmir since its annexation, is being pushed towards a conflict with Pakistan by a confluence of military, health and economic crises, which have badly dented Indian Prime Minis­ter Narendra Modi’s standing at home.

Gen Bajwa emphasised the need for bolstering defence and operational preparedness and said there was a dire need of enhancing indigenous defence production in evolving security environment.

Al Khalid-I has been developed in collaboration with China and Ukraine.

The Inter-Services Public Relations (ISPR) said the tank, during the ceremony, exhibited some of its “outstanding capabilities”, including mobility, speed, bi-axis gun stabilisation of the control system and use of smoke screen to mask movement.

According to information about the tank on HIT’s website, it is equipped with enhanced protection against smart ammunition and other forms of top attacks. The tank has improved Muzzle Reference System, Solid State Auto Loader, Improved Radiation Detector and independent and effective command and control system for deeper and long-distance operations.

The website further states that the tank is capable of sustainable operations in nuclear environment because of it life support system. It says the tank has been developed for “higher strategic and tactical mobility”. It is also said to be capable of fighting in built up areas or the urban warfare.

The ISPR said Al Khalid-I will be handed over to formations which have critical and decisive role during wars.

HIT Chairman Major General Syed Aamer Raza highlighted the ongoing projects, achievements of his organisation and its contribution to defence production in pursuit of self-reliance.