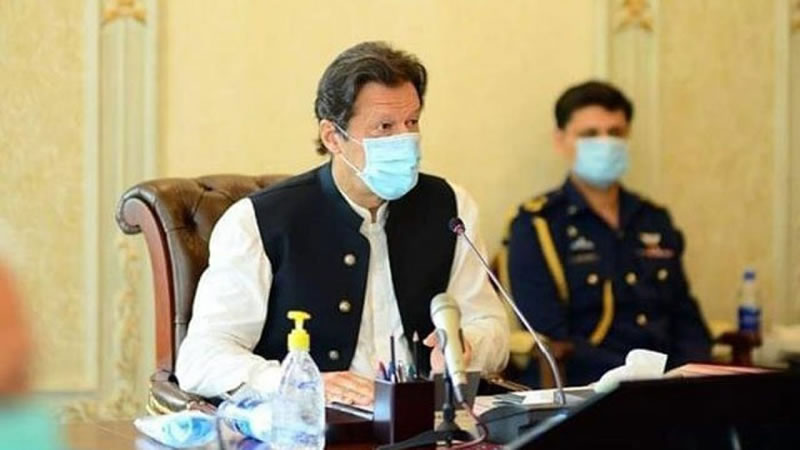 Prime Minister Imran Khan Thursday advised the countrymen to exercise extra caution during the preparations for upcoming Eid-ul-Azha to avert resurgence of coronavirus as curve was on flattening trend in the country.

“I appeal to my people not to do again what they did on previous Eid (Eidul Fitr). Any public gathering causes the spread of virus and puts pressure on hospitals, doctors and nurses besides causing deaths,” the prime minister remarked while talking to media persons after inaugurating the first-ever Isolation Hospital and Infections Treatment Centre here.

Spread over 40 kanals of land, the 250-bed pre-fabricated facility is fully equipped to combat Covid-19 pandemic providing all modern facilities including five intensive care units, ventilators, nurse calling system as well as maiden E-ICU facility to allow doctors from abroad to treat the patients through telemedicine. The Chinese government has provided $4 million for construction of the facility.

The prime minister said the effective measures collectively taken by the provinces as advised by the NCOC have amazingly led to the flattening of coronavirus curve even before the projected timeframe. He said as the infections rate is on downward trend, it can surge again if the people show negligence and violate the standard operating procedures (SOPs). “I appeal the people to celebrate this Eid with simplicity. The SOPs has been formulated for the Eid. Just for sake of national economy and well-being of old-aged people and already ailing people, it is essential to observe Eid with simplicity,” the prime minister said, who earlier visited different sections of the hospital after unveiling its plaque. He lauded the tremendous work by the NDMA for completion of the facility in record 100 days despite the lockdown impeding the movement of the people and transportation of material. He said the completion of such specialized hospital manifest the political will of the government to carry out the challenging task in difficult time.

In his remarks, the NDMA chairman thanked the governments of Pakistan and China, Chief of Army Staff General Qamar Javed Bajwa and Chinese Ambassador in Pakistan Yao Jing for extending their full cooperation to complete the mega task. During the briefing, the prime minister was informed that the hospital would be operated through public private philanthropic partnership for interim period of up to December 2020 when it would cost around Rs 300 million.

Separately, Prime Minister Imran Khan directed his team members to hold meeting with the management of the K-Electric for early resolution of the issues with the company. In a meeting with Governor of Sindh Imran Ismail, the prime minister instructed him (governor) as well as Federal Minister for Planning Asad Umar and Special Assistant to PM Shahzad Qasim to meet the company’s management to address the issue of load shedding in Karachi. Both the governor and the prime minister discussed the overall situation in Sindh particularly related to the COVID-19.

US Revokes Permission for PIA to Operate Special Direct Flights