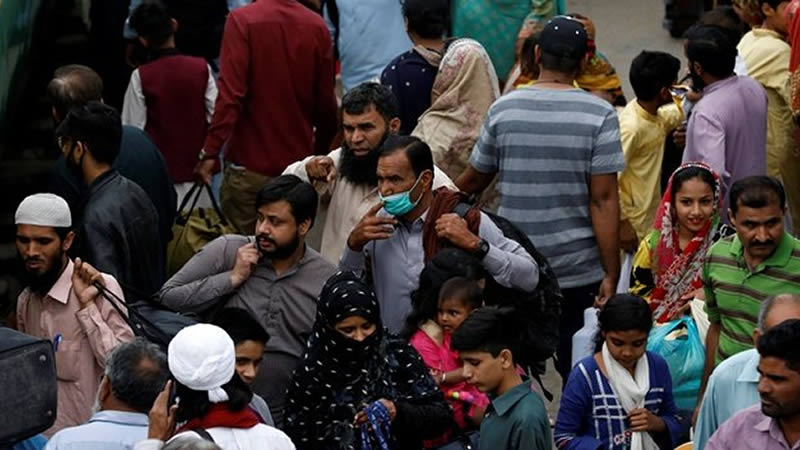 The government sought to quell widespread fears on Monday after a sudden spike in cases of the novel coronavirus in the country with Sindh confirming 150 patients of COVID-19, the respiratory illness caused by the mysterious contagion, in the province and Khyber-Pakhtunkhwa reporting its first 15 cases.

Going by the number of cases confirmed by provincial authorities, the nationwide tally of COVID-19 positive cases stood at 184 as of midnight on Monday – 150 in Sindh, 15 in K-P, 10 in Balochistan, 5 in Gilgit-Baltistan, and two each in Punjab and Islamabad – though State Minister for Health Dr Zafar Mirza gave a lower figure of 94.

Health officials and government spokesperson in Sindh said most of the cases in the province – 119 in Sukkur – were the pilgrims who had returned from a “purported quarantine” at the Taftan border crossing where they were kept after returning from Iran. There were 10 more patients in Karachi and one in Hyderabad.

Meanwhile, the K-P government confirmed 15 COVID-19 cases – all of them pilgrims released from quarantine at the Taftan border crossing. With 150 new cases in Sindh and 15 in K-P pushed the nationwide tally to 184 – the largest single-day increase, so far.

Dr Mirza said the federal and the provincial governments were taking best care of the patients. “So far, 94 people coronavirus cases are confirmed in the country,” he said, adding that the most of the cases have been reported by Sindh.

Hours later, the Sindh government gave a tally of 150 COVID-19 patients. The Provincial Health Department said 119 patients were confirmed in Sukkur, while 30 were in Karachi and one in Hyderabad.

“Out of this [total] 119 are Zaireen who are being kept in Sukkur,” tweeted Murtaza Wahab, the adviser to the chief minister on information. “This exponential increase is largely due to the recent inflow of people brought in from Taftan after a purported quarantine,” he added.

Sindh Minister Saeed Ghani said the quarantine facilities in Taftan on the Iranian border were inadequate, which resulted in large numbers of coronavirus cases. “Out of 100-plus samples [of those returning from Taftan], 50 results [came out] positive, which is a huge number.”

K-P Health Minister Taimur Jhagra reported 15 new cases in the province. “Just received news that 15 out of 19 individuals [who] arrived in K-P from Taftan, have tested positive for the coronavirus. These are the first positive cases in K-P,” Jhagra said in a tweet. “They are being well looked after in quarantine in an isolated facility in DI Khan,” he added.

Speaking to The Express Tribune, Jhagra rubbished rumours of the death of a coronavirus patient in Peshawar. He clarified that a suspected patient had passed away while authorities awaited results. “His blood tested negative for COVID-19.”

In Quetta, Balochistan Chief Minister Jam Kamal defended the efforts of the provincial government to contain the coronavirus spread. In a tweet, the chief minister invited his counterparts from other provinces to visit the facilities at the border points and elsewhere in the province.

“Not only we are doing in Taftan… But Rideeq, Quetta, rest districts and now this new facility on Pak Afghan border with Army/FC,” he tweeted. “I invite all CMs, federal authorities and electronic media to come Quetta, see Taftan, Jivani Turbat and Chaman border with me…”

The chief minister’s tweet came as a number of pilgrims, placed in quarantine at the Taftan border crossing, staged a protest outside their tents on Monday, demanding authorities to repatriate them to their home province of Sindh.

The protesters said that those tested positive in Sukkur were cleared at the camp to travel. “If 50 per cent of them are positive then it’s an alarming situation for us all who are living and eating together,” said a protester. “It’s riskier now.”

Dr Mirza stressed the need for collective response to the “coronavirus challenge”, which had affected more than 172,000 people in 147 countries around the globe. “So far, more than 78,000 patients have cured the disease,” he added.