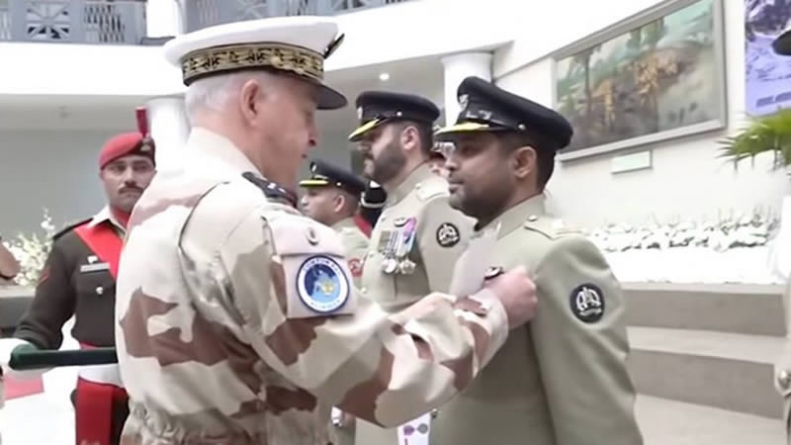 Four Pakistan Army pilots were conferred with a prestigious French military award on Wednesday for their 2018 daring mission to rescue a French mountaineer stuck on the world’s ninth highest peak in northern Pakistan.

France National Defence Bronze Medal was conferred on the Army Aviation pilots by Rear Admiral Didier Malterre, Commander of French Joint Force in the Indian Ocean, at a ceremony held at the Army Museum in Rawalpindi, according to the military’s media wing, the ISPR.

Medaille de la Defense nationale, or National Defence Medal, was created by Charles Hernu, French Minister for Defence and established by decree on April 21, 1982. It rewards particularly honourable service rendered by military personnel for their participation in operational activities. The medal has three levels: Gold, Silver and Bronze.

The brave Army Aviation pilots had rescued French mountaineer Elisabeth Revol, who was stuck on Nanga Parbat, on the request of French Embassy in Islamabad in January 2018.

The pilots had flown four Polish climbers, who were engaged in an expedition at the base camp of K2, in an Army Aviation helicopter to Nanga Parbat in order to rescue Elisabeth Revol and her fellow Polish climber Tomasz Mackiewicz in a dramatic rescue mission, winning accolades from both Paris and Warsaw.

Nanga Parbat, the world’s ninth-highest mountain at 26,660 feet, has earned the moniker of “Killer Mountain” after more than 30 climbers died trying to scale it before the first successful summit in 1953.

This author has not added a biography. Meanwhile Top has contributed 2217 posts. Click here to view them.