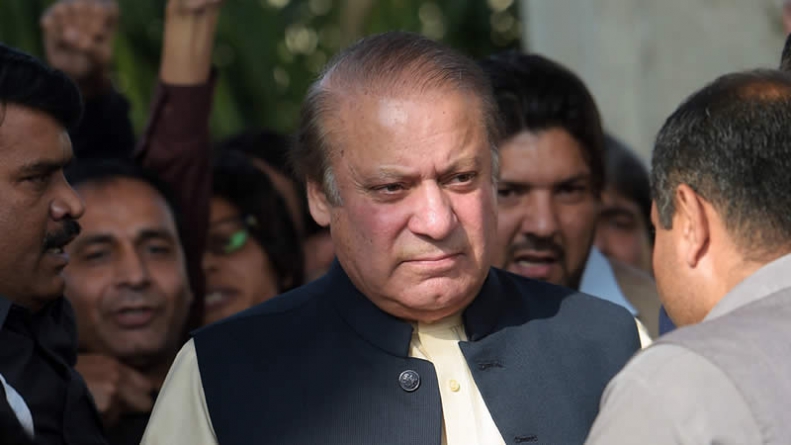 An accountability hearing against ousted premier Nawaz Sharif, his daughter Maryam Nawaz and son-in-law retired Captain Safdar was adjourned on Friday after an order passed yesterday by the Islamabad High Court (IHC) regarding the clubbing of three references against the Sharif family could not be procured by the court in time.

Today was the first time Sharif, Maryam and Safdar were present in court together. The disqualified PM arrived in Islamabad from London on Thursday amid VIP protocol. It was also the first trial hearing Sharif appeared for after the three were indicted by the accountability court on October 19.

As the hearing began today, Sharif’s lawyer Khawaja Haris filed a fresh application for the clubbing of the three accountability references naming the ex-PM.

Haris had approached the IHC on Thursday requesting the clubbing together of the references. The IHC had accepted the petition and requested the accountability court to provide a long order explaining the legal reasons behind its decision not to club the three references together.

During Friday’s hearing, the accountability court judge said that he would have to review the IHC’s orders before he provided a detailed response on the matter.

However, half an hour after proceedings began, the court had still not received the IHC’s order and subsequently decided to adjourn the hearing until November 7.

“Am I being punished for ending terrorism and loadshedding in Pakistan?” asked the former PM while speaking to the media on his way to the court.

“Asif Zardari is maligning me to placate someone else,” said Nawaz while referring to the PPP co-chairman’s recent criticism aimed at the PML-N chief.

The Sharif family is facing trial in connection with NAB references pertaining to the Avenfield flats, the Al-Azizia Steel Mills and Hill Metal Establishment.

The three accused pleaded not guilty to the charges. Hassan and Hussain Nawaz were named co-accused in the charge sheet in the references.

A five-member bench of the Supreme Court on July 28 had directed NAB to file references against Nawaz and his children in six weeks in the accountability court and directed the trial court to decide the references within six months.

The Supreme Court also assigned Justice Ijazul Ahsan a supervisory role to monitor the progress of the accountability court proceedings.