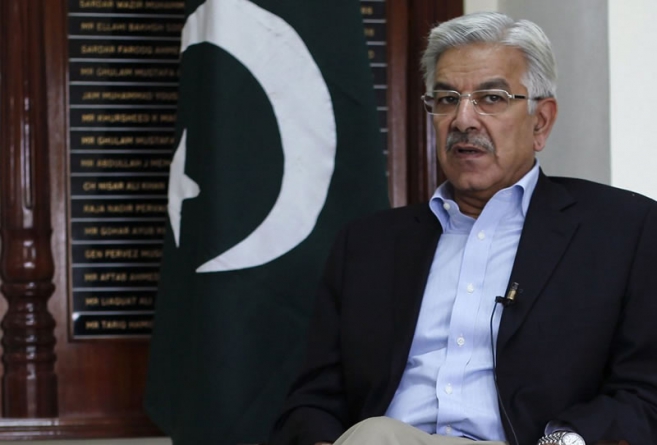 Foreign Minister Khawaja Mohammad Asif warned on Thursday that if India launched a surgical strike on the country’s nuclear installations, nobody should expect restraint from Pakistan either.

Indian Air Force chief B.S. Dhanoa said on Wednesday that if India needed to carry out a surgical strike, his aircraft could target Pakistan’s nuclear installations and destroy them.

The foreign minister addressed the Indian air chief’s remarks at a talk at the US Institute of Peace in Washington on Thursday, urging Indian leaders not to contemplate such actions as those could have dire consequences.

“Yesterday, the Indian air chief said we will hit, through another surgical strike, Pakistan’s nuclear installations. If that happens, nobody should expect restraint from us. That’s the most diplomatic language I can use,” said Mr Asif.

The foreign minister, who is in Washington on a three-day official visit, met US National Security Adviser Gen H.R. McMaster on Thursday, a day after he held wide-ranging talks with US Secretary of State Rex Tillerson. While both US and Pakistani sides have described the Asif-Tillerson talks as “positive” and “useful”, Mr Asif indicated that his meeting with Gen McMaster was not as friendly as the earlier meeting. The shared interest in a secure, prosperous and democratic Pakistan was one of the key issues discussed in a frank conversation between Mr Tillerson and Mr Asif, says the US State Department.

The two top diplomats met at the State Department in Washington on Wednesday for talks aimed at halting a rapid deterioration in bilateral ties.

“They talked about the importance of partnering together to establish peace and prosperity in the region. They talked about their mutual commitment to advancing a multifaceted relationship between the United States and Pakistan based on our shared interest in a secure, prosperous, and democratic Pakistan,” said State Department spokesperson Heather Nauert when asked what was discussed in the meeting.

“The foreign minister and the secretary talked about the president’s South Asia strategy that was announced back in August. They also exchanged ideas about how our countries can work together to help stabilise Afghanistan,” she added.

Although their relations were already tense, the tensions worsened after US President Donald Trump’s Aug 21 policy speech in which he warned Pakistan to eradicate alleged terrorist safe havens from its soil or be ready for the consequences.

Later, senior US officials told various media outlets that the United States could stop providing economic and military assistance to Pakistan, degrade its status of a major non-Nato ally and place Pakistani officials with alleged ties to terrorists on a terrorist-watch list.

At the State Department briefing, a journalist pointed out that when the new US strategy was unveiled, the language about US-Pakistani ties was much harsher than what Secretary Tillerson used in his remarks after the meeting. “Was none of (the punitive actions underlined by US officials) discussed with the Pakistani foreign minister?” the journalist asked.

“We typically don’t provide the fulsome types of readouts, we don’t do a play-by-play, a blow-by-blow of everything that happens in our private diplomatic conversations,” the spokesperson responded.

“What I just read to you, that’s what I can provide to you from the meeting. I know our conversations with the Pakistani government continue to be frank,” she added.

Another journalist reminded Ms Nauert that in response to a question at this stakeout on Wednesday, Secretary Tillerson had expressed concerns about the future of government of Pakistan. “What did he mean by that?”

Ms Nauert said she did not get the chance to ask the secretary about those remarks and that’s why she did not know what he meant.

Responding to a question about US-Pakistan relations at his stakeout, Secretary Tillerson had said: “We have concerns about the future of Pakistan’s government too, in terms of them — we want their government to be stable. We want it to be peaceful. And many of the same issues they’re struggling with inside of Pakistan are our issues.” – Dawn