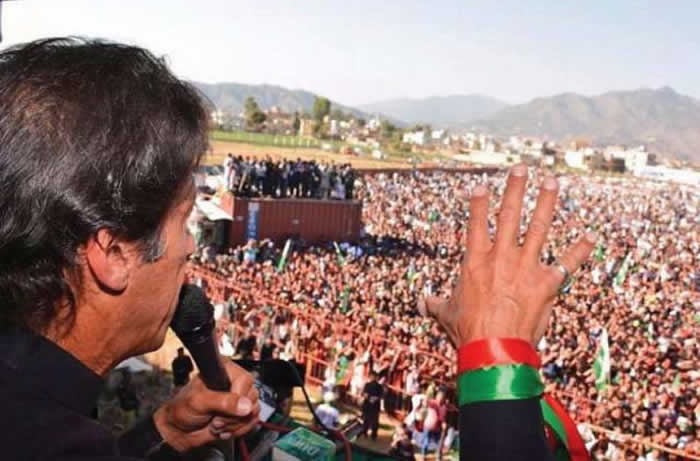 “Asif Ali Zardari was twice arrested from the Prime Minister’s House for his involvement in corruption and Nawaz Sharif carries the same record,” he said at a public meeting organised by the PTI in Kotli. Mr Khan said that 12 cases were pending in the National Accountability Bureau (NAB) against Mr Sharif, which were a big source of worry for him.

He said that only 30 years ago Mr Zardari and Mr Sharif did not possess much wealth and now they owned properties worth billions of rupees in foreign countries. “Both leaders siphon off their ill-gotten money outside the country,” Mr Khan said. He said that due to corruption in Pakistan, overseas Kashmiris were reluctant to return and make investments here. He said that privatisation of Pakistan International Airlines (PIA) and Pakistan Steel Mills was not the best solution; instead, the government should focus on the management of the two institutions.

He claimed that PTI would root out corruption and corrupt leaders from the country. Mr Khan said it was time for the AJK people to change their destiny by voting out PPP and PML-N leaders, who had been allegedly looting the people.

He asked the AJK youths to thwart the possibility of rigging and compete at every polling station in coming elections to the Legislative Assembly. “The people in Azad Kashmir should follow the example of Jahangir Khan Tareen who put every polling station of his constituency under the watchful eyes of his supporters to prevent rigging and defeated the PML-N by more than 40,000 votes,” the PTI leader said. Drawing a comparison of previous governments in Khyber Pakhtunkhwa with the one being run by his party, he said that people should see for themselves how the system had been changed.

He claimed that “Naya Pakistan” had been built in KP and next would be Naya Azad Kashmir. The PTI leader said that first time in the KP’s history a sitting minister had been sent to jail on corruption charges. “This is a revolution,” he said.