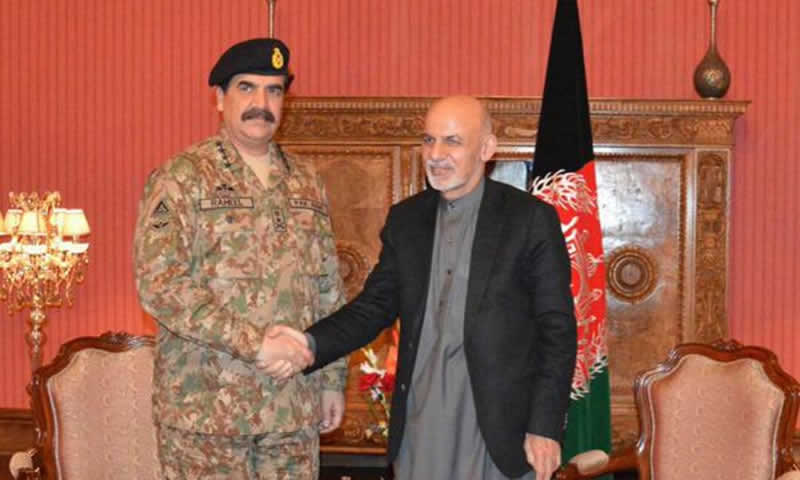 Pakistan has shared credible evidence with the Afghan authorities that a faction of the Tehreek-i-Taliban Pakistan (TTP) directed the Bacha Khan University attack from Afghanistan. Chief of the Army Staff Gen Raheel Sharif called Afghan President Ashraf Ghani, who is in Davos for attending a meeting of the World Economic Forum,

Chief Executive Abdullah Abdullah and top US and Nato commander in Afgha­nistan Gen John Campbell to inform them about the evidence that has emerged from investigations into the university attack pointing towards Afghanistan-based terrorists controlling it.

“As investigations and leads so far, Charsadda terror attack was being controlled from a location in Afghanistan through Afghan cellphone by a TTP operative,” military spokesman Lt Gen Asim Bajwa said in a tweet about an update on the probe into the attack. Gen Bajwa, who addressed a press conference on Wednesday in Peshawar, had then stayed short of saying that the attack was handled from Afghanistan. A Foreign Office spokesman too, at his weekly media briefing held hours before Gen Bajwa issued the update, had asked journalists to avoid jumping to conclusions and instead wait for the completion of investigations.

The army chief, during his telephonic conversations with both Afghan leaders and the US commander, who is also leading the Resolute Support Mission, asked them to cooperate in bringing to justice the mastermind, planners and handlers of the attack. The attack left at least 21 people, including students, a faculty member and security guards dead. Most of the casualties took place in the university boys’ hostel, where the terrorists struck after scaling the campus wall. The strike was claimed by TTP Geedar group’s commander Aurangzaib alias Khalifa Umar Ameer Naray, who was also involved in attacks on Peshawar’s Army Public School in December 2014 and Air Force’s Badabher camp in September last year. Following army chief’s telephone calls to Davos and Kabul, a security official said that proofs were delivered to the Afghan authorities. These detailed the location from where the calls were made and the mobile phone number that had been used.

The TTP elements, including its chief Mullah Fazlullah, who fled military operations here, have set up sanctuaries in Afghanistan along the border. The official said the attacker had called from a ‘terrorist base’ in Afghanistan close to the border with Pakistan. He would not specify the location fearing that it could compromise further investigations. The allegation was immediately dismissed by Afghan interior ministry’s spokesman Sediq Seddiqi. He denied that the TTP had sanctuaries in Afghanistan and instead accused Pakistan of sheltering the Afghan Taliban.