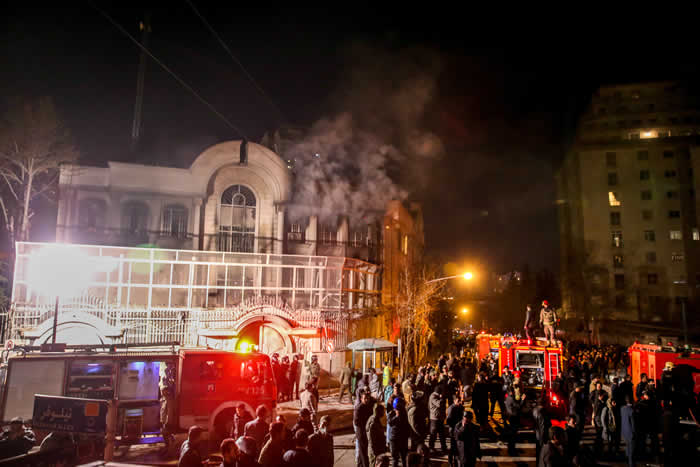 Pakistan disapproved on Monday a mob attack on Saudi Arabia’s embassy in Tehran, which sparked a diplomatic crisis between Iran and Arab countries.

“The attack on the Saudi Embassy in Tehran, which is against international norms, is most unfortunate and deeply regrettable,” the Foreign Office said in a statement. It said: “It is the responsibility of states to provide full safety and security to all diplomatic missions and their personnel.”

Protesters agitating against execution of Shia scholar Sheikh Nimr Baqir Al-Nimr by Saudi Arabia had on Sunday ransacked and set on fire Kingdom’s embassy in Tehran. The statement comes ahead of a Jan 7 visit by Saudi Foreign Minister Adel Jubeir to Islamabad. He was to previously visit Islamabad on Sunday, but postponed the visit at the eleventh hour following escalation with Iran. There were rumours that Pakistan was also exploring options about downgrading its diplomatic relationship with Iran. After repeated attempts, the FO spokesman replied: “I will not comment on rumours and speculations.”

Relations between Islamabad and Tehran are already lukewarm because of the Saudi factor. There have been protests in Pakistan against the execution of the Shia cleric. But the FO has avoided commenting on the development that led to escalation of tensions between the two rivals. A scheduled Jan 18 trip by Defence Minister Khawaja Asif to Tehran, according to a diplomatic source, has become uncertain following the tiff between Saudi Arabia and Iran.