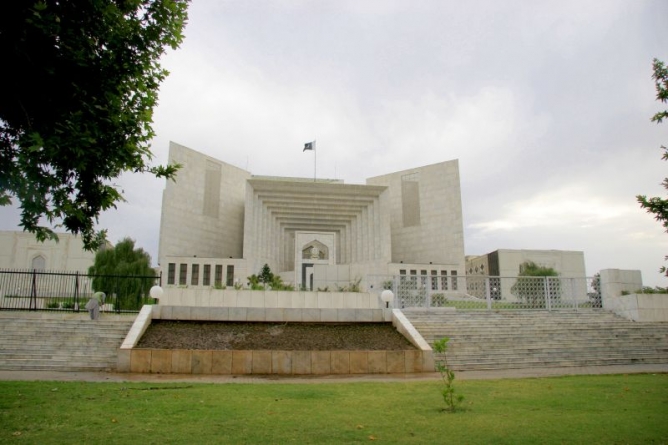 The Supreme Court (SC) on Wednesday in a majority ruling upheld the establishment of military courts in Pakistan. Petitions challenging the 21st amendment were dismissed in a majority 11-6 vote of the 17-member SC bench.

Justice Nasirul Mulk and Justice Dost Muhammad announced the verdict. In a 14-3 majority vote, petitions challenging the 18th amendment were also dismissed by the bench. Judges provided seven opinions and two additional notes on the ruling.

The judgement was to be announced by the full court bench headed by Chief Justice Nasirul Mulk in Courtroom No 1 of the SC building. The SC office had issued a supplementary cause list heralding the announcement of the judgement. The Parliament passed the 21st Amendment and the Pakistan Army Act, 1952, to establish the special courts after the massacre in the Army Public School, Peshawar, last year. On April 16 the apex court had suspended executions of six militants who were awarded death sentence by these military courts. The stay order was issued on an application filed by rights activist Asma Jehangir on behalf of the Supreme Court Bar Association (SCBA) after army chief Gen Raheel Sharif had ratified the death sentence to six militants and life imprisonment to one by the military courts. The judgement on the 21st Amendment as well as the 18th Amendment will be the last major verdict by Chief Justice Nasirul Mulk as he will attain superannuation on Aug 16.

Over five-month long hearing on the challenges to the 18th and 21st amendments was wrapped up by the Supreme Court on June 26. A total of 31 constitutional petitions were taken up by the court, of which 16 petitions were regarding 18th Amendment the rest were about 21st amendment. The 18th Amendment was passed by the Parliament during the last PPP government which introduced a new procedure for the appointment of superior court judges. The final judgement in the 18th Amendment case is still pending with the Supreme Court for the last four years though a full-court bench headed by then Chief Justice Iftikhar Muhammad Chaudhry had issued an order on Oct 21, 2010, suggesting that guidelines in the mode of appointment of superior court judges under Article 175-A of the constitution. Later the Parliament brought the 19th Amendment by accepting almost all the proposals and incorporating in the Constitution as suggested by the Supreme Court.