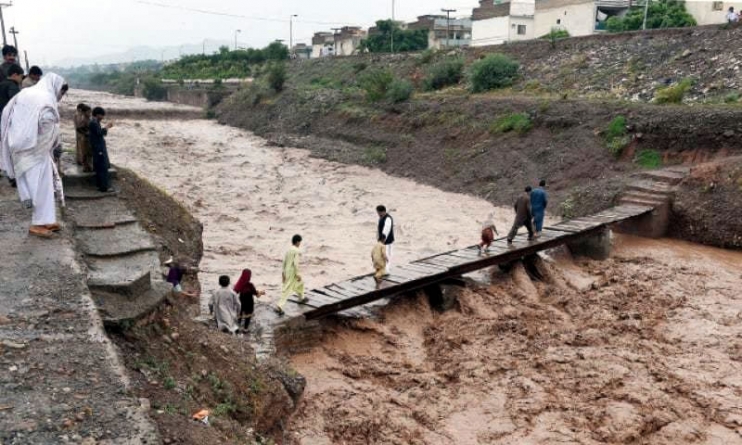 One person was killed in rain-related incident in Peshawar as heavy downpour lashed Khyber Pakhtunkhwa and tribal areas on Thursday, officials said.

The Khyber Pakhtunkhwa government has put all departments and agencies concerned on high alert in Peshawar, Mardan, Nowshera and others districts, following surge in water level in different tributaries of the Kabul River and streams.

The Rescue 1122 said that one person was killed when a house collapsed in Achini Bala area on the outskirts of the provincial capital. Roof of a mosque also caved in on Warsak Road while current spell of the monsoon also caused damage to houses in different localities. The rainwater entered houses and inundated shops in low lying areas of the city and also submerged parts of University Road, Kohat Road and streets in Hayatabad. The Budhni Nullah and Nasar Bagh Nullah were in medium flood and authorities asked the people living in low lying areas alongside the nullahs to evacuate their houses and shift to safer places. All water courses and streams around Peshawar were overflowing due to heavy rain which disrupted vehicular traffic. Provincial Disaster Management Authority, quoting provincial irrigation department, said that all major rivers were flowing normal.

It said that the Indus River (inflow) at Tarbela with 380,000 cusecs and outflow at Tarbela with 327,000, Kalpani Nullah at Mardan City Bughdada with 21561 cusecs were at medium flood levels. In Charsadda, heavy rainfall caused minor damage to houses along the river banks. The inclement weather also damaged standing crops in the district. Peshawar-Tangi Road remained closed to traffic for three hours due to rain. An official said that around 40 houses had partially damaged in Charsadda where authorities declared emergency in the main district headquarters hospital. In Swat, torrential rains set alarm bells ringing to the areas located along the rivers and streams on Thursday. Continuous rain in upper belt of Swat valley already sent warnings to the residential areas and agriculture fields after several villages in Gabral areas were inundated by floodwater.