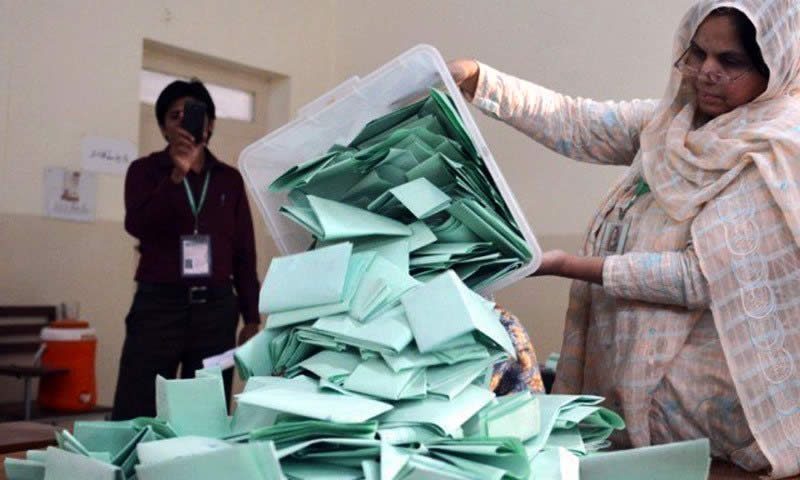 The Pakistan Tehreek-i-Insaf finally presented before the poll inquiry commission on Tuesday the evidence it has been banking on to establish that the 2013 general elections were stolen from it through systematic rigging.

The ruling PML-N raised objections to the documents presented by the PTI and said that these should not be considered as exhibits, but taken as marked at best.

Ishaq Khakwani, the head of PTI’s task force on issue, presented on oath 522 documents and materials in 79 volumes, including newspaper clippings and editorials and nine video clips, to be looked into by the three-judge Judicial Commission headed by Chief Justice Nasir-ul-Mulk.  Mr Khakwani also submitted an affidavit which stated that in his capacity as head of the task force he had collected and compiled the documents and he had no reason to believe that these were not authentic. PTI’s counsel Hafeez Pirzada informed the commission that most of the evidence was official because these had been obtained from the website of the Election Commission of Pakistan (ECP). He said the presidential ordinance — a consensus document between the PML-N and the PTI — allowed the commission to examine any document or material relating to the last elections. Shahid Hamid, representing the PML-N, said his client did not want to shut out any evidence, but stressed that the documents should at best be taken as marked and not considered as exhibits. He said one thick volume of the PTI evidence consisted of a signature campaign in which different people had expressed dissatisfaction over the way the elections were held, while the rest comprised 73 election disputes and appeals filed in different election tribunals and the Supreme Court. Of the 73 disputes, petitions in 40 cases have already been rejected by the tribunals.

The chief justice asked the counsel not to go into merits of the case and said the commission would take into account the objections raised by PML-N at the time of arguments. The commission said it could hold an in-camera inquiry to save time and retired for 15 minutes to allow Shahid Hamid to formalise his objections to the PTI documents. Mr Hamid later said he wondered whether Mr Khakwani had ever got the authority from the candidates whose election disputes he was referring to and raised a set of objections. He said that except for the National Assembly seat (NA-168) from where Mr Khakwani had contested but lost, he did not author the material he was presenting before the commission. All these documents, Mr Hamid argued, were not admissible under Section 9(2) and 10 of the presidential ordinance because these related to disputes which had already been settled by the tribunals or were pending before the Supreme Court in appeal. Forty petitions have already been dismissed, while 13 cases are pending.

The counsel said Mr Khakwani was not an agent of the 73 election petitions he had produced on record. He was neither the author of PTI’s white paper on the last elections which was also part of the evidence nor was his name ever mentioned in it. And lastly, none of the material had been obtained from a proper custody, Mr Hamid said. Salman Akram Raja, representing the ECP, said the affidavit presented by Mr Khakwani was vague because it did not say if he had himself collected all the documents or these had been received or transmitted. Moreover, he said, a negative statement had been made in the affidavit that Mr Khakwani had no reason to believe that these documents were not authentic. The commission said every political party would get the opportunity to cross-examine witnesses and asked them to prepare their questions in advance because they would not be called again. The commission decided to record testimonies of three official witnesses named by the PTI, out of a list of 13, on Wednesday afternoon. They are: Former chief secretary of the Punjab caretaker government Javed Iqbal, former additional chief secretary Rao Iftikhar and former election commissioner of Punjab.