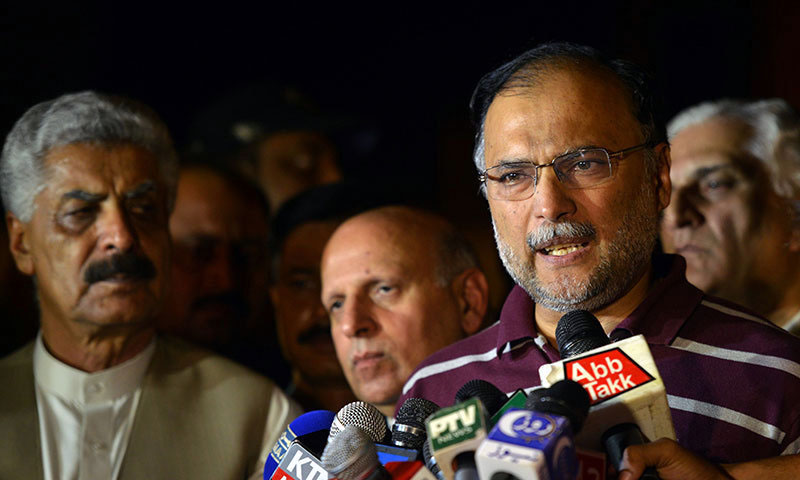 The government and the PTI continued to trade accusations over the proposed inquiry commission into alleged rigging in the May 2013 general elections, with both sides accusing the other of distorting facts.

PTI chief Imran Khan, addressing the media at his Bani Gala residence, reminded the government of its promise to constitute the commission, which Mr Khan claimed it had agreed to during a meeting between the two sides on Dec 30. Taking exactly the opposite position, Information Minister Pervaiz Rasheed shot back at the PTI chief for “speaking half-truths about the negotiations”.

The government is all for the judicial commission, but not the way the PTI chief wants it to be,” he told reporters at his own presser at the Press Information Department. According to Mr Khan, the government representatives, Ishaq Dar and Ahsan Iqbal, agreed during the meeting that the commission will inquire into three facts: firstly, whether the general elections were organised and conducted impartially, honestly, fairly, justly and in accordance with law; secondly, whether the elections had been manipulated or influenced by anyone; and thirdly, whether the overall results were a true and fair reflection of the mandate given by the electorate.

“Is the PTI asking for something unconstitutional,” Mr Khan wondered, adding that his party believed that if a judicial commission was formed, it could effectively address their concerns. Even if there are no re-elections as a result of the judicial commission’s findings, the exercise would help bring genuine democracy in the country, Mr Khan added. But the information minister, on his part, accused the PTI chief of lying, saying: “The government desires that the commission should only determine whether the PML-N has – by design – rigged last general elections as the PTI leadership repeatedly accuses us of doing.” Secondly, Mr Rasheed explained, the PTI also wanted the proposed commission to reinvestigate cases that election tribunals had already disposed of, which was against the Constitution.

The minister asked the PTI leader not to twist the facts, as he had claimed that in all four constituencies — NA-110, 122, 125, 154 — PTI’s petitions have been heard by election tribunals, where the party had failed miserably to prove its point. PTI General Secretary Jahangir Tareen has written to Senator Dar, reminding him of their Dec 30 sitting so that they could sign an MoU, which Mr Tareen claimed both sides agreed to do.