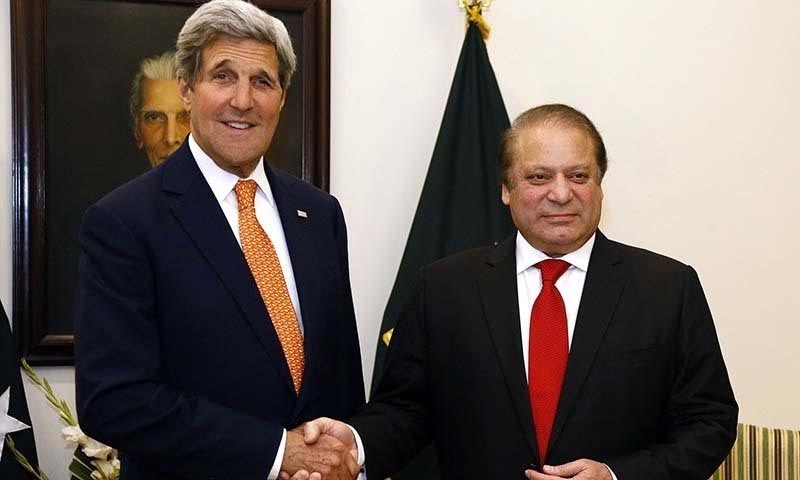 0
SHARES
1
VIEWS
Share on FacebookShare on Twitter
US Secretary of State John Kerry arrived in Pakistan on Monday with assurances that the US would continue its support in the battle against terrorists. Having arrived on a two-day visit to Pakistan, Kerry met Prime Minister Nawaz Sharif at the PM house in the first of a series of meetings.
[contentblock id=1 img=adsense.png]

The US Secretary, who arrived after visiting India, is expected to meet members of the political and military leadership and discuss bilateral relations and regional security. One part of the talks will focus on the sharing of intelligence reports and evidence of Indian involvement in subversive activities across Pakistan, highly placed military sources told Dawn. The evidence is alleged to credibly identify financial support, training and provision of weapons to militants. At the PM house meeting, Nawaz said the US was a vital component of Pakistan’s foreign policy.
[contentblock id=2 img=gcb.png]
He appreciated President Obama’s message of friendship and cooperation in the aftermath of the Peshawar attack on December 16. Secretary Kerry extended condolences of the US government and people over the tragedy, and said that terrorists were the common enemy of the two countries. Nawaz also highlighted Pakistan’s focus on greater market access for local products and US investment in the country, aimed at creating job opportunities.
He expressed hope that the next Business Opportunities Conference to be held in Islamabad in March 2015 would receive a good response from US investors. On Tuesday Kerry will lead a US delegation in Pakistan-US strategic dialogue at the Foreign Ministry. Later in the day he will meet with Army Chief General Raheel Sharif at GHQ and discuss security and defence cooperation between the two countries.

The US Secretary of State is also set to visit the Army Public School which was the scene of a Taliban massacre, a top official confirmed. “We heard you are planning to visit Peshawar and the school,” Sartaj Aziz, the national security adviser to Prime Minister Nawaz Sharif, told Kerry shortly after he arrived for an unannounced two-day visit. Earlier, an FO official had told Dawn, “Following the Peshawar school carnage and the country’s resolve to fight against terrorism in its wake, the visit has assumed great importance” “Surely, the prime minister will ask Senator Kerry for technical and training assistance for the rapid force that the government has decided to set up under the National Action Plan,” the official said.

Earlier this month, FO spokesperson Tasnim Aslam said at a media briefing, “The US Secretary of State, John Kerry, is visiting Pakistan this month for Pak-US Strategic Dialogue. The arrangements are being finalised. And according to Pakistan’s Ambassador to US Jalil Abbas Jilani, the discussions would focus on how to advance bilateral engagement.”The Pak-US Strategic Dialogue focuses on five areas of cooperation. These are: energy; security, strategic stability and non-proliferation; the defence consultative group; law-enforcement and counter-terrorism; and economy and finance.