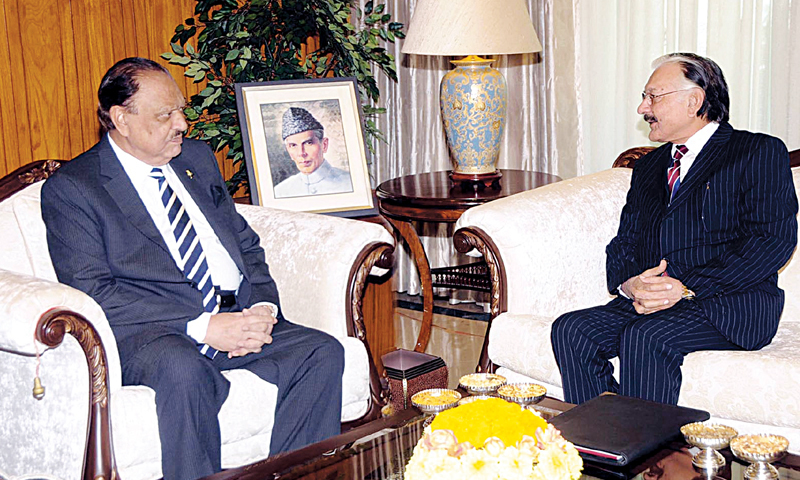 The president also urged the CEC to carry out delimitations required in Punjab and Sindh for holding long delayed local government elections. According to the president’s spokesman, CEC Justice Raza met the president on Tuesday after assuming the charge of his office this month and pledged to make the election commission more effective organisation and hold fair and free elections. The president expressed hope that the new CEC will run affairs of the commission diligently, efficiently and effectively,” the spokesman said. “In the present political scenario in the country, the entire nation is looking towards the new chief election commissioner to resolve various election-related issues and introduce electoral reforms to enhance the credibility of the Election Commission of Pakistan,” the spokesman quoted the president as saying.

Later the PTI, which is virtually acting as the main opposition party in the country, staged a sit-in which lasted for over four months on the issue of rigging, demanding an audit of the 2013 elections and electoral reforms. However, the parliamentary committee could not meet the task within three months’ time. The spokesman said the president asked the CEC to carry out delimitations in Punjab and Sindh in consultation with all stakeholders to avoid controversies. The issue of delimitations in Sindh and Punjab is said to be the main cause of the delay in holding LG polls in both provinces despite several orders of courts.

According to a report submitted before the Supreme Court on Dec 6, the ECP had said it could not initiate the process of delimitations in Punjab and Sindh because both provincial governments had not provided certain essential prerequisites to the commission. The Supreme Court was informed that the process of delimitations of local governments could be started after receipt of notifications of demarcation of local areas, determination of number of councils and wards, authenticated maps and amendments to the local government laws in the two provinces. LG polls have not been conducted in the country for past nine years and the federal government, through an ordinance passed on Oct 14, empowered the ECP to carry out delimitations in the two provinces.