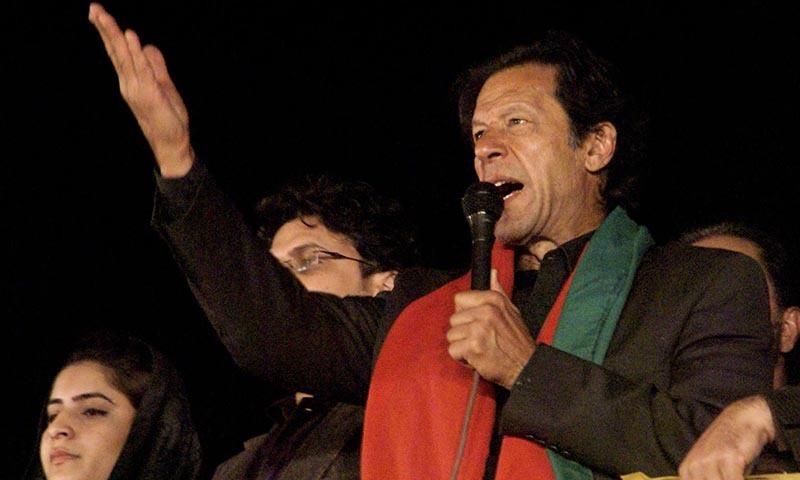 Pakistan Tehreek-i-Insaf chief Imran Khan, on Tuesday, expressed the hope that the next elections would be held before Eid and said that his party would sweep those polls. Speaking to his followers from atop his container at D-Chowk on Tueday evening,

Imran said that he had several plans in the pipeline to put pressure on the government to accept his party’s demands for a fair probe into last year’s general elections. He also appreciated his supporters’ commitment, who had stayed with him for over 100 days now, saying, “You people have laid the foundation of Naya Pakistan.” Mr Khan said that while people may face hardships due to his party’s planned shutdowns of major cities, but that was the only way he could compel the government to give into his demands. He outlined PTI’s proposed style of government, saying that the party would turn Pakistan into a welfare state. Promising to turn the PM House into an educational institution, he said that the various governors’ houses in all four provinces would also be converted into public spaces.

Separately on Tuesday, PTI leaders Shireen Mazari and Asad Umar accused the government of spending Rs30 million in taxpayer money to fund an anti-PTI ad campaign. At a a press conference at the party’s central office in the capital, the two leaders asked the Supreme Court of take notice of the ‘illegal’ spending of public money. The two leaders claimed that the information ministry was using funds from the exchequer to indulge in character assassination. They also passed around certain documents purported to be evidence of the release of funds to an advertising agency for an aggressive ad campaign against their party.

Dr Mazari said that PTI chief Imran Khan and Asad Umar had agreed to an audit of their and their families’ assets and demanded that Nawaz Sharif, Ishaq Dar and others also do the same. They also maintained that Information Minister Pervez Rashid, in a recent press conference, had distorted facts regarding Imran Khan’s financials. But in a statement issued on Tuesday evening, the Ministry of Information denied allegations that it had issued release orders for anti-PTI advertisements that were broadcast on various TV channels ahead of the PTI’s Nov 30 rally in the capital. -dawn