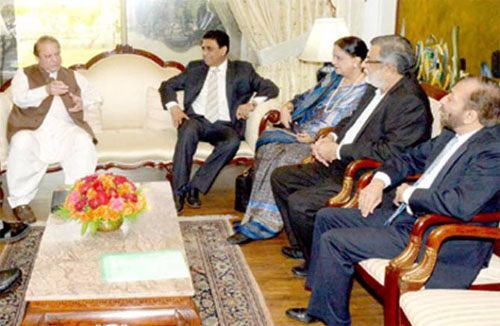 Terming the difference of opinion as beauty of democracy, Prime Minister Nawaz Sharif stressed the need for resolving differences among political forces through dialogue and discussion. Premier Sharif was talking to MQM delegation led by Farooq Sattar which called on him here on Tuesday.

Other members of the delegation included Abdul Rashid Godil, Kahlid Maqbool and Nasreen Jalil. Sources informed The Nation that prime minister wanted Muttahida Qoumi Movement to dilute tension with Pakistan People’s Party and even offered to play role in this connection. The erstwhile coalition partners in Sindh government – MQM and PPP – are at daggers drawn. The recent spate of clashes was sparked by PPP leader Syed Khursheed Shah’s painting Mohajirs in negative colour, which was followed by PPP Chairman Bilawal Bhutto Zardari’s ‘provocative’ speech against MQM. These are ostensibly trivial matters but the differences of the two parties are old and deep-rooted.

The two parties have been vying for long for asserting their control on province’s administrative and economic structures. This has led to serious and perpetual conflict over such issues as the local bodies system in the province and MQM’s demand for a new province comprising urban areas of Sindh where it is more influential. These sources further informed that MQM delegation shared their concerns about the ongoing operation against criminals in Karachi and sought prime minister’s help to help stop ‘victimisation’ of their party workers and activists in the name of this operation. Both PPP and MQM had chequered history of making and breaking of alliances but this time the breakup between the two seemed serious with both parties taking extreme positions, and for the first time in the history MQM came up with the demand of separate province for Mohajirs in the name of a new administrative unit.

The prime minister assured them of addressing their genuine concerns regarding Karachi operation but he said that across the board operation against militants and miscreants in Karachi would continue without any fear or favour, as all of them wanted to see peace and tranquillity in the port city. The prime minister said, “Our constitution provides ample space for debate to all democratic forces in the country,” adding that the two mainstream political parties – MQM and PPP – should resolve their issues through dialogue. To mitigate some of the concerns of the MQM, Prime Minister Sharif directed for timely completion of ongoing development projects in Karachi and called upon the democratically elected forces to work in unison for the development and progress of Sindh.

He asked them to work for the unity and prosperity of Pakistan. Sources further said that the PM advised MQM leaders not to whip up the issue of new administrative unit right now keeping in view the political and other crises facing the country, as he added that any wrong move on part of political forces could again derail the democratic order in the country. He assured MQM delegation that government would help resolve the problems being faced by the people of Karachi and also assured that federal government would provide special funds for completion of some of the mega projects in the port city. Sources said the PM succeeded in cooling down the fuming tempers of the MQM leaders and they assured that they would adopt restraint but at the same time made it clear that they would not step back from their demand of more administrative units in the province.