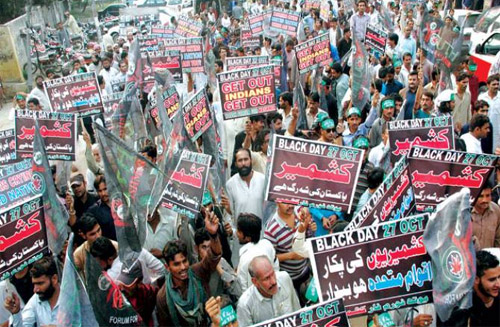 The Kashmiris, dwelling on both sides of the Line of Control and in the rest of the world, observed Monday as Black Day to protest the landing of Indian forces in Jammu and Kashmir on this day in 1947 against the wishes and aspirations of people of the valley.

Protests were also staged all across Pakistan to express solidarity with the Kashmiris. Big rallies were taken out in Karachi, Lahore, Islamabad, Peshawar and other cities.

The Black Day was observed with the renewal of the pledge to continue the struggle for the achievement of legitimate right to self-determination and liberation of occupied Kashmir from the Indian subjugation. The main protest rally, followed by a big procession, was staged by a large number of people belonging to all spheres of life on the Mirpur district courts premises under the auspices of the District National Events Organising Committee in collaboration with various segments of civil society.  The participants of the protest rally wore black armbands and carried banners and chanted anti-India and pro-freedom slogans, condemning the continued Indian subjugation for the last 67 years.
The rally was attended by leading social and political workers and representatives of various organisations.

Qaiser Shiraz Kazmi, Shakoor Mughal, Muhammad Ayub Muslim and others highlighted the importance of early peaceful settlement of the Kashmir problem.  They reiterated Kashmiris’ legitimate demand for early grant of their birth right to self-determination without further delay. They supported Kashmir policy of Pakistan and the bold and courageous stance on the issue taken by Prime Minister Nawaz Sharif in his recent address to the UN General Assembly.

They urged India to give an immediate matching response to Pakistan’s sincere role and efforts for early peaceful resolution of Kashmir issue in line with the aspirations of the people of Jammu & Kashmir and resolutions of the UN. The speakers also called upon the UN to move for getting Kashmir issue resolved in line with the resolutions passed by the Security Council 67 years ago. They also called upon the world community to take immediate notice of the continued Indian reign of terror and violence unleashed against the innocent Kashmiris to suppress their voice of freedom. The rally unanimously passed various resolutions against the continued Indian occupation of Kashmir. Through these resolutions, the rally urged the world community and international organisations to take immediate notice of the ugly state of affairs in the occupied valley following human rights abuses by the Indian forces at a massive level.

In Sialkot, Kashmiri people observed Black Day against the Indian occupation of Jammu and Kashmir and rising atrocities in the held valley. The Kashmiri people wore black armbands and strongly condemned the Indian invasion.
They said October 27 was the blackest day in the history of Kashmir as on this day Indian Army had invaded Jammu and Kashmir. Addressing protest rallies in Sialkot, Daska, Sambrial, Uggoki, Bajwat, Pasrur, Badiana, Chawinda and surroundings, local Kashmiri leaders, including Abid Hussain, said sacrifices of thousands of Kashmiri martyrs would become fruitful as the sun of freedom would rise in the occupied valley soon. They said peace could never be promoted in South Asia without resolving the prolonged delayed burning issue of Held Kashmir. They termed Kashmir a key to peace. They strongly criticised the imposition of curfew in the held valley, terming it violation of human rights by the occupying Indian Army.

Dr Zahid Ghani Dar urged the world community to use its influence to globally pressurise India for halting the large scale human rights violations, custodial killings and genocide of the oppressed Kashmiri people and resolve the issue according to the aspirations of the people of the state. Monitoring Desk adds: Adviser to Prime Minister on National Security and Foreign Affairs Sartaj Aziz said on Monday that Pakistan Army was fully prepared to deal with Indian aggression on the Line of Control and the Working Boundary.  During a meeting of Senate Standing Committee on Foreign Affairs held with Haji Adeel in the chair, Aziz said India had been trying to send a signal to Pakistan to forget Kashmir if it wanted talks and friendship. He said Pakistan was all set to take up with UN Human Rights Council the issue of unprovoked cross-border aggression by India and the resulting civilian casualties. -nation