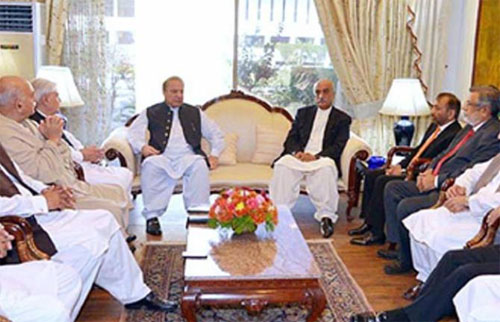 Stressing the need for speeding up electoral reforms to ensure transparency in the future elections, the heads of Parliamentary parties have unanimously said that Parliament is the most appropriate forum to take up and resolve political issues facing the country.

Heads of Parliamentary parties held a meeting with Prime Minister Nawaz Sharif at his Parliament House Chamber on Wednesday.

Sources said that majority of the participants were of the view that government should not show any haste in acceptance of resignations of Pakistan Tehreek-i-Insaf lawmakers, as the move would worsen the political crisis in the country. They reiterated their unconditional support to the government against any undemocratic move to derail the incumbent political system but at the same time asked it to provide relief to the masses and better its performance at all levels.  Sources said that the prime minister thanked the parliamentarians for their support in the face of prevailing political imbroglio and expressed his government’s resolve to show maximum restraint in any situation like they had shown on the issue of PAT and PTI protest campaigns. [contentblock id=2 img=adsense.png]

Sources said that the issue of PTI MPs resignation was initially taken up by Leader of Opposition in the Upper House Ch Aitzaz Ahsan who was of the view that acceptance of their resignations would worsen the political crisis and he suggested that the resignations should not be accepted in haste. The heads of other parliamentary parties also supported it and some of them were of the view that acceptance of PTI resignations would have negative fallout and it could even affect the upcoming local bodies’ elections in Punjab.  PM Nawaz Sharif assured the parliamentarians that he would take whole parliament along in taking major decisions and he also gave brief overview of the steps his government has taken for the revival of national economy.

The PM said that remaining within the legal and constitutional limits the government would show maximum leniency on the PTI resignations issue because they believed in the process of dialogue and wanted to resolve the issues through negotiations. Premier Nawaz also agreed to the point of expediting electoral reforms process and said that the committee under the head of Senator Ishaq Dar was already working on it. He expressed hope that it would accomplish the task in minimum possible time. He emphasised that all political issues should be discussed and resolved through the parliament.  “All political parties should play their due role in transforming Pakistan into a prosperous and developed country. We are trying to ensure good governance in the country through a consultative process which also includes the opposition parties,” he said.

The prime minister said the government was taking all-out measures to streamline the economy and help the poor.  PM Nawaz Sharif said Pakistan wants to cultivate cordial relations with all the countries in the region. “Our armed forces are fighting courageously in North Waziristan against the terrorists and giving sacrifices to ensure a peaceful and secure Pakistan,” he said. Sources said that the decision of PAT chief Dr Tahirul Qadri to windup sit-in was welcomed by the parliamentarians and they expressed the hope that PTI chief Imran Khan would also follow the suit and would return back to parliament to get all his concerns addressed.