Qadri to Delay Sit-ins in Wake of Moharram 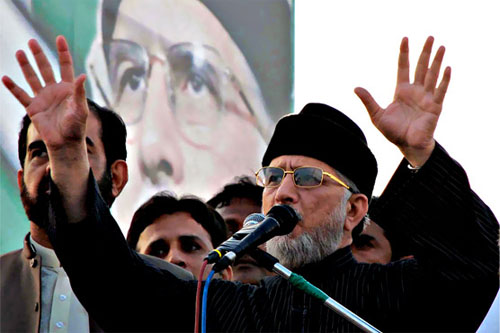 Tahir ul Qadri decides to postpone Sit-in due to Muharram

According to the sources, Tahirul Qadri is likely to make an announcement in his address in Islamabad today in the evening. Earlier, while talking to the media in Lahore Tahirul Qadri said he would announce the future strategy and outline of further program after he joins Islamabad sit-in today evening. He pronounced his rally in Islamabad as ‘Jashan e Bedari e Awam. Not a single matter was resloved in the negotiations with the government. He thanked God for the massive reception and rally in Lahore.

Qadri condemned the shameless act of government to snub freedom of speech. He said this government has a history of exhibiting intolerance to media freedom. All channels have played a pivotal role to awaken people’s conscience. PAT chief said Mubashir Lucman is banned because he was showing facts and evidence to the people, he added. -dunyanews

The Memorable and Respected Teachers

The Memorable and Respected Teachers