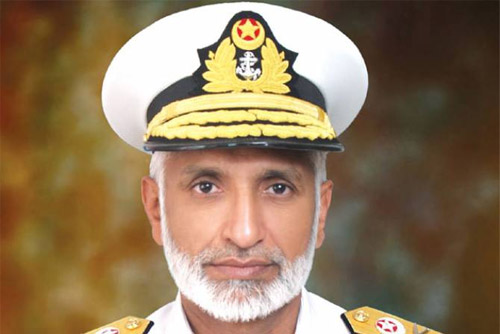 Promoting him to the rank of Admiral, the president of Pakistan on Thursday appointed Vice Admiral Muhammad Zakaullah as Chief of the Naval Staff.

Vice Admiral Zakaullah will succeed Admiral Mohammad Asif Sandila who will relinquish the command of Pakistan Navy on 7th Oct. His promotion to the rank of admiral will be effective from the date of assuming command of the Pakistan Navy.

The change of command ceremony will be held at PNS Zafar Naval Complex, Islamabad. According to Pakistan Navy, Vice Admiral Muhammad Zakaullah was commissioned in operations branch of Pakistan Navy in June 1978. On commissioning, the officer won the coveted Sword of Honour from Pakistan Naval Academy. He was also awarded chief of the naval staff gold medal at his graduation. During his distinguished career, the admiral attained vast experience of operational, training and command assignments. [contentblock id=2 img=adsense.png]

He is a keen yachtsman who represented Pakistan at numerous international events including 1984 Olympics (USA), 1986 Asian Games (South Korea) and 1990 Asian Games (China). He won Gold Medal at the Asian Games twice and various other awards at international sailing championships.