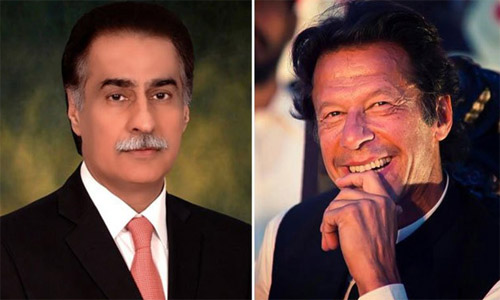 National Assembly Speaker Sardar Ayaz Sadiq on Thursday insisted that personal appearance of Pakistan Tehreek-i-Insaf lawmakers was mandatory for the verification of their resignations.

He expressed these views while talking to the media after PTI MNAs Shah Mahmood Qureshi, Asad Umar and Ali Muhammad, who were summoned by the speaker in his chamber, did not turn up for the verification of their resignations.

In a related development, Political Jirga members Sirajul Haq, Mir Hasil Bizenjo and Rehman Malik called on the speaker in his chamber and once again requested him not to accept the resignations of the PTI MPs to give rapprochement another chance.  Talking to media persons after the meeting, Speaker Ayaz Sadiq said that it was his duty to verify the resignations by PTI MPs and ensure that those were not given under pressure. He said he was bound to verify that each resignation tendered by PTI MPs was voluntary in nature under the Supreme Court of Pakistan’s verdict and the Rules of Procedure and Conduct of Business of National Assembly 2007. To a question about the PTI leadership’s desire to verify their resignations en masse, he said it was not D-Chowk where all the PTI representatives could be summoned together, and insisted that each MP has to appear in person in his chamber to verify his resignation as a member of the National Assembly. [contentblock id=2 img=adsense.png]

When asked what would be his course of action if the PTI MPs refused to appear before him, the speaker said he would act as per the rules governing the functioning of the lower house of the parliament. To a question, he said two PTI MPs had resubmitted their resignations after making corrections.  Rubbishing the allegation of biasness on his part, Ayaz said he was strictly following the rules and procedures and had never overstepped his constitutional limits. “I have run the assembly sessions impartially and have even gone the extra mile to accommodate the opposition,” he said.  To a question, the speaker said he has great regard for the Political Jirga, but he would have to act as per rules on the issue of PTI resignations because he has already given much time to the protesting party’s lawmakers.  Expressing his views on the occasion, Political Jirga head Sirajul Haq admitted the deadlock between the government and the protesting PTI and PAT was intense, but he was optimistic to make a breakthrough.

According to him, dialogue was the only way forward.  He said acceptance of resignations would deepen the crisis and it could get a serious dimension detrimental to the whole political system. Senator Rehman Malik and Mir Hasil Bizenjo also shared the concern of Siraj and expressed their resolve to bring the estranged parties back to the negotiating table.  Before calling on the speaker, the Political Jirga held a meeting at the residence of Rehman Malik and discussed various options to bring the parties back to the negotiating table. It was decided that the Jirga would approach the government and the protesting parties and persuade them to resume the dialogue and try to evolve a consensus on the remaining contentious points as on a number of issues the government, PTI and PAT negotiators had almost agreed.

After the meeting, Sirajul Haq said all the stakeholders concerned must hold talks in national interest. He said the issue of floods needed full attention. He said the whole country was worried over the political standoff.  Referring to the power-sharing deal in Afghanistan between the presidential candidates, he said if they could resolve the deadlock on election rigging through negotiations, why it could not happen in Pakistan. He appealed to the government, PTI and PAT to readjust their positions and sit across the table. Senator Rehman Malik said all the three stakeholders must observe restraint. He said the people were expecting resolution of the dispute. He said the Jirga has been continuously appealing to all the three sides to continue negotiations and resolve the outstanding issues. “Please be friendly with each other and work according to the Constitution of Pakistan,” Malik urged. Senator Mir Hasil Bizenjo also shared similar views. -nation