Hashmi to Contest by-Polls as Independent 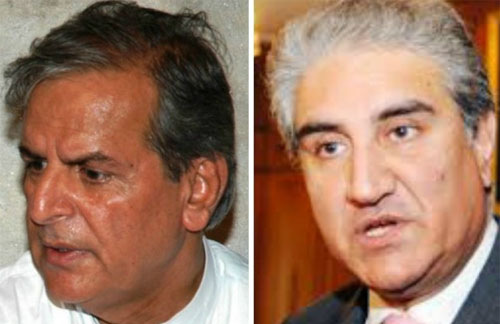 Hashmi to contest by-polls as independent

Veteran politician Javed Hashmi has announced he will contest NA-149 by-elections as an independent candidate. He said this while addressing a press conference here on Monday.

Challenging Pakistan Tehreek-i-Insaf Vice Chairman Shah Mehmood Qureshi to contest election from his own constituency, the disgruntled PTI president said the city would decide who was a tainted politician.

He said Qureshi had announced the PTI would not contest by-elections but he challenged him (Qureshi) to resign from NA-150. “I will contest election from his constituency and Qureshi should contest election from my constituency to prove who is tainted. This city knows both of us,” he added. Hashmi said after tendering resignation in parliament, Qureshi had no moral justification to cling to the NA-150. Hashmi said he had no rivalry with Qureshi as was generally perceived.

“I come from the middleclass. Neither I accept oblations nor do I plunder the poor by disguising myself. I don’t even follow any spiritual leader,” he said.Discussing party matters, he said Shireen Mazari was expelled from the party and Khursheed Kasuri was not allowed to submit nomination papers for the party’s vice chairmanship to accommodate Shah Mehmood Qureshi. He further said Imran Khan was naive but some people were just using him for their ulterior motives. Hashmi claimed a number of PTI leaders had been former aides of president retired Gen Pervez Musharraf.

Lashing out at Sheikh Rashid, Hashmi said he knew him since the days he used to sleep on a charpoy on a footpath in front of a hotel in Lahore.

“Sheikh Rashid is the joker of politics,” he added. He said sit-ins had damaged the country’s economy and parliament was playing its due role for the first time in history. -dawn

“Lollywood is over. It’s time for Kollywood: Javed Sheikh