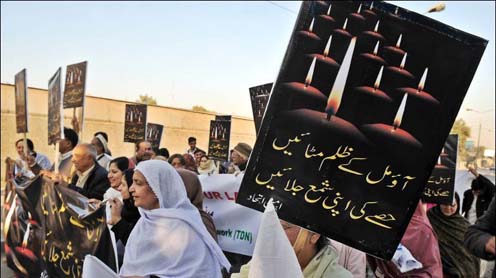 KARACHI: Protesters, including women and children, held sit-ins across the country, including in major cities Karachi, Quetta, Lahore, Islamabad, Multan and Hyderabad to voice anguish at the attack on a bus carrying Shia pilgrims in Mastung that claimed around 26 lives.

Majlis Wahdat-e-Muslimeen (MWM) appealed for complete shutdown on Friday to mourn Mastung tragedy in which Shia pilgrims embraced martyrdom in the attack.  Karachi Transport Ittehad has also given a strike call from Friday morning till evening due to the probable law and situation of the city.

The people of Hazara Shia community carried coffins of the pilgrims killed in the Mastung bomb attack and continued their sit-in protest on Alamdar Road in Quetta on the second consecutive day.  Shia organisations also arranged protests in Karachi on Wednesday evening at several locations, including Numaish Chowrangi on MA Jinnah Road where MWM led the protesters.

The MWM protesters blocked many key highways and roads with sit-ins at various places, increasing the troubles for commuters and motorists travelling towards their destinations amid blocked routes.
The MWM protesters staged their protest sit-ins at Numaish Chowrangi, Nazimabad, Malir 15, Gulistan-e-Johar, Shahrah-e-Faisal near airport, Safari Park, and Golimar area of the metropolis. A large number of protesters participated in those sit-ins amid freezing cold to express unity with heirs of Mastung pilgrims bus blast victims to persuade the government to take quick action against terrorists of banned outfits.

“Sit-ins will continue till the government meets our legitimate demands that include countrywide military operation to eliminate terrorists,” asserted Allama Hassan Zafar Naqvi, spokesman and deputy secretary general of the MWM Pakistan at a press conference here on Thursday.  The MWM rejected the much-trumpeted idea of talks being floated by some religio-political parties’ leaders saying that the assassins of over 50,000 Pakistanis deserve capital punishment instead of appeasement.

The MWM leader further demanded that in Karachi, TTP terrorists have made Manghopir Kanwari Colony, Afghan Camp Sohrab Goth and surrounding areas and some other parts of the city their safe-havens where security officials fail to take due action. He demanded all such no-go areas should be liberated forthwith.  Allama Hassan Zafar rejected the claims of good and bad Taliban saying that a religio-political party leader called Hakimullah Mehsud a martyr and Mehsud’s TTP spokesman Shahidullah Shahid claimed responsibility for bombing of Major General Sanaullah, attack on Express News crew and suicidal attack in RA Bazaar. He said that outlawed Lashkar-e-Jhangvi (LeJ) whose terrorists were trained in Taliban-ruled Afghanistan claimed responsibility for many terrorist attacks including Mastung Tragedy.  He demanded compensation, government employment and free education and health facilities for the heirs of the martyrs.