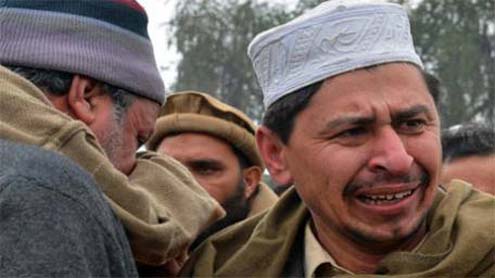 PESHAWAR: At least seven people were killed and eleven injured on Wednesday in a bomb attack on a police van taking officers to guard polio vaccination teams, officials said.

The blast in Sir Dheri, some 30 kilometres north of Peshawar came a day after gunmen killed three polio workers in Karachi. Police said that up to five kilogrammes of explosives were used in the bomb, which was rigged to a bicycle and detonated remotely.

“Seven people including six police personnel and a child were killed in a bomb blast in Sir Dheri,” senior police official Shafiullah told AFP. Another senior police official, Sayed Khan, told AFP the van was carrying personnel to a health centre, from where they were to accompany polio vaccination teams for security. “We will continue providing security to polio workers as scheduled by the provincial government,” he said. An official of the district administration confirmed that the police team was on its way to provide security to polio workers when it came under attack.

Wednesday was the second day of an anti-polio drive in the area, senior local administration official Tahir Zafar told AFP. Pakistan is one of only three countries in the world where polio is still endemic, along with Afghanistan and Nigeria. Militant groups see vaccination campaigns as a cover for espionage, and there are also long-running rumours about polio drops causing infertility. According to the World Health Organisation, Pakistan recorded 91 cases of polio last year, up from 58 in 2012.

Meanwhile, miscreants attacked an anti-polio team in Bhakkar District on Wednesday. According to the local police, the incident took place in Bahal area of Bhakkar. Unidentified miscreants on motorcycles attacked the vehicle of an anti-polio team with sticks and iron rods. They shattered the windows of the vehicle and injured a lady health supervisor and her driver. Both were shifted to a nearby hospital while the assailants fled.

On Tuesday, gunmen killed four health workers taking part in a polio vaccination drive in Karachi and Mansehra. After the attacks, the provincial polio workers’ association said it was halting operations across Sindh. Men on motorbikes opened fire on polio teams in two separate incidents in the Qayyumabad neighbourhood of the city. The attacks came just days after the World Health Organisation warned that Peshawar was the world’s “largest reservoir” of the poliovirus.

Meanwhile, minutes after three anti-polio workers were shot dead in Karachi, one campaigner was killed in brutal attack in Mansehra District of Khyber Pakhtunkhwa. Miscreants on a motorbike fired on an anti-polio team in Sher Garh area of Mansehra, killing a male health worker on the spot. Pakistan is one of only three countries in the world where polio remains endemic, along with Afghanistan and Nigeria. Efforts to eradicate it have been seriously hampered by the deadly targeting of vaccination teams in recent years. Dailytimes