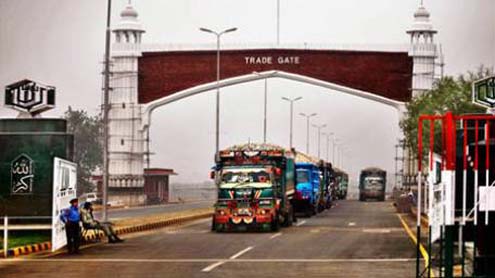 NEW DELHI: India and Pakistan agreed on Saturday to allow round-the-clock movement of trucks and containers through their main Wagah-Attari border crossing, signalling a thaw in relations after a year’s standoff over military tensions on the border.
Trade ministers of the two countries meeting in New Delhi also approved a liberalised visa policy for businessmen to help expand two-way trade, which was barely $2.5 billion in 2012/13 fiscal year against a potential $10 billion.

Both sides hope closer integration of Pakistan with India’s giant economy would help lay the ground for a lowering of political tensions between them. “We have agreed that we will open Wagah-Attari border 24/7 for trade,” Anand Sharma, India’s trade minister told reporters, referring to the main border crossing in Punjab. The border gates at the moment are open only from dawn to dusk.

“For a robust economic relation to develop, businessmen of both sides need to visit each other’s country. (There is) need for further liberalisation of visa regime,” Sharma said. Pakistan also agreed to provide non-discriminatory market access to Indian companies.

Over the last year there was little movement on trade because of a series of incidents over military control of the line dividing Kashmir between the two countries. Two years ago, the two countries set a goal of taking bilateral trade to $6 billion by 2014, which now seems difficult to attain.

Commerce Minister Khurram Dastgir Khan said that State Bank of Pakistan had proposed its Indian counterpart grant banking licences to three Pakistani banks, a move which would be reciprocated by his side.

“In the banking sector we are hoping to have some progress, very rapid progress,” he said. He said Pakistan has been waiting for the Reserve Bank of India to nominate banks that could be allowed to open branches in Pakistan. Both Prime Minister Nawaz Sharif and his Indian counterpart Manmohan Singh are keen to rebuild ties.

Pakistan’s economy grew at 3.6 percent in 2012/13 and the government was forced to borrow $6.7 billion from the International Monetary Fund to avert a default of payments. Sharma said he would also lead a business delegation to Pakistan next month. The ministers also agreed that both sides would convene meetings of the technical working groups of customs, railways, banking, standards organizations and energy to devise the modalities for effective implementation of all requisite measures.

The ministers noted with satisfaction that there has been enhanced interaction between the business communities of both countries. Several trade delegations have been received on either side. A Joint Business Forum of Chief Executive Officers in different sectors has also met twice. The ministers also said that several sub-groups have been formed by this Joint Business Forum to enhance trade cooperation in diverse sector such as textiles, tourism, energy, engineering, pharmaceuticals and others. They noted that the third meeting of this Joint Business Forum is scheduled in Pakistan for mid-February, 2014. With the objective of enhancing bilateral trade opportunities, FICCI and the Trade Development Authority of Pakistan are also coordinating an “India Show” in Lahore in mid-February, 2014.

This will build upon the success that was achieved on the business front through the similar India Show in Lahore in February, 2012. It is envisaged that as part of the India Show activities, artists on both sides of the border will jointly create paintings to express the common heritage of the people of both countries.-Dawn