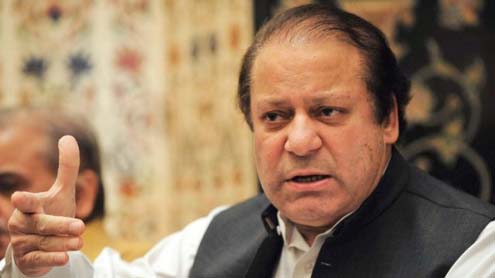 SWAT: Prime Minister Nawaz Sharif, during his visit to Swat on Wednesday, approved in principle and announced a brigade-level cantonment for Swat and Malakand.
The prime minister gave the approval during a briefing given to him. He also lauded the role played by the Pakistan Army in restoring peace and stability in the area. Nawaz also said on Wednesday that he would contact the political leaders to help carry forward the dialogue process with the Taliban.

“I will talk to Imran Khan, Maulana Fazlur Rehman, Maulana Samiul Haq and Syed Munawar Hassan. If they make any breakthrough, it would be a great pleasure for me. Hopefully, this will help the process move forward speedily and effectively,” the premier said in an interview with a private television channel, the excerpts of which were aired on Wednesday. The complete interview would be aired tonight, according to the channel.

Agreeing with the TV anchor’s suggestion of engaging other political leaders in the talks process, the prime minister said he already had such a strategy in his mind and would ask these leaders to extend cooperation. He said the participation of former army chief Ashfaq Parvez Kayani and the ISI chief in the all-parties conference proved that the army was not separate from the nation. “They had also endorsed the APC decisions,” he added.

Prime Minister Nawaz travelled to Swat District to sell his much-triumphed Youth Loan Scheme, saying party affiliation would not qualify anyone for the loan. “It does not matter if the applicant belongs to Pakistan Muslim League-Nawaz, Pakistan People’s Party, Pakistan Tehreek-e-Insaf or any other political party; they will get a loan if they qualify,” he said while addressing a select group of people in Mingora where a curfew was imposed to guard him against any Taliban attack.

He said that party affiliations were limited to election campaigning. “Now that I’m the prime minister of the entire nation, these differences don’t matter.” Khyber Pakhtunkhwa Chief Minister Pervez Khattak was not invited to the packed hall where the prime minister came to sell his loan scheme. Khyber Pakhtunkhwa Governor Eng Shaukatullah and others received Nawaz. The prime minister said that no powerful person would influence the decision to grant any loans. “Deserving applicants will get the loan,” he said, adding that as a head of the state, he should stick to justice even if it “costs” him the premiership.

Nawaz said all provinces would get equitable share under the PM’s Youth Business Loan Scheme. He said the loans would be dispensed in accordance with the population ratio of each province. “The loan quota of a province would not diverted to any other federating units in case less applications were received from a province. Instead, the shortfall of the applications of that province would be shifted to the next month,” he added.

The prime minister said the applications for business loans would be decided purely on merit regardless of affiliation with any political group. Prime Minister Nawaz said that the government was alive to the issues of backwardness, unemployment and economic deprivation in the country and was striving to address these through judicious distribution of resources.-dailytimes