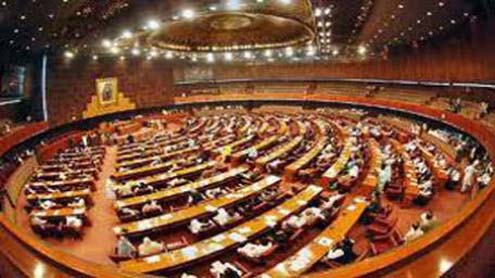 ISLAMABAD: Opposition senators on Wednesday came down hard over the government’s response towards the Senate, and said that the government is not giving any importance to parliament.

They said the prime minister did not come to parliament and federal ministers were not responding properly to the questions raised by senators. During the question hour at the Senate, most of the ministers failed to properly respond to senators’ queries.

He asked the Senate chairman to teach ministers how to respond to parliamentarians’ questions in parliament. No minister has come here with preparation, he added.
Leader of the House Raja Zafarul Haq agreed with Aitizaz and assured the House that he would take appropriate measures in this connection.

Senate Chairman Nayyar Hussain Bukhari was of the view that usually a senator asks about one thing but the minister concerned explains something else. ANP senators and Abid Sher Ali also contradicted each other’s statements over AGN Qazi formula, approved by the Council of Common Interest (CCI).

Abdul Nabi Bangash and Ilyas Bilor claimed that according to AGN Qazi formula, the federal government has to pay Rs 20 billion per annum to KP as the Rs 6 billion formula has not been approved by anyone.

ANP senators staged a walk out, saying that the Centre was not fulfilling rights of Khyber Pakhtunkhwa properly. On a point of order, PPP Senator Mian Raza Rabbani identified that the government is violating constitution by not calling a Council of Common Interest (CCI) meeting despite passage of over 160 days.-dailytimes

Minister Riaz Pirzada assured the House that he would contact the PM within 48 hours and discuss the issue. After a meeting with the PM, he said, the House would be informed. Holding of CCI meeting in 90 days is a constitutional requirement, he said.

On a call attention notice, Raza Rabbani raised the issue of sacking of 500 employees of LESCO.
He said that well off people were facilitated through SROs, but regretted that PSM employees have failed to get salaries from the last three months.

To protest against sacking of LESCO employees, the opposition also walked out. Abid Sher Ali informed the House that the 500 employees were daily wagers and they were fired from their jobs on discretion of the company.- dailytimes